Most people are aware of Peavy?s professionalism, competitiveness and excellent control. But Peavy?s terrible vision often flies under the radar.

?My eyesight is not good,? Peavy said Thursday. ?You guys will see in the games you?ll watch, I will have times where I don?t see the catcher well, especially in low light conditions. But it?s just something, they can?t get me back to 20/20, my eyes. I?m not a candidate for the laser, and I can get to about 20/40, so that?s about as good as they can give me with the astigmatism and stuff I have going on. I don?t see that well.?

Peavy?s vision is actually 20/300 without corrective lenses, and the right-hander told Sports Illustrated in 2007 that without glasses or contacts he sees ?a big blur of colors.? Fortunately for Peavy, the Red Sox and anyone stepping into the batter?s box against him, he does wear corrective lenses, and he has enjoyed plenty of major league success despite the issue.

?Well I?m legally blind without my corrective lenses, so if you see me walking around and I don?t have contacts in or I don?t have glasses, I will fall off this little platform,? Peavy said. ?I can?t function without them. It would be a scary moment if I did that.? 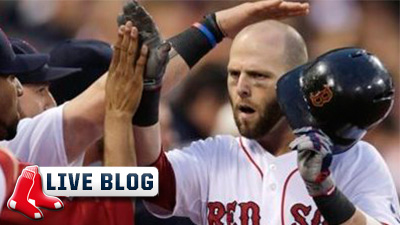