The New Hampshire native is being sidelined based on a shocking ruling by The International Paraylmpic Committee (IPC), that says her disability may not be permanent and therefore she?s ineligible to compete.

The IPC released a statement Sunday, according to CBSBoston.

“IPC Swimming can confirm that Victoria Arlen of the USA will not participate at the 2013 IPC Swimming World Championships and future IPC Swimming competitions having failed to provide conclusive evidence of a permanent eligible impairment. Following her classification at the London 2012 Paralympic Games last August, IPC Swimming requested a medical report into her impairment within 12 months. This was duly provided by the USOC on 24 July 2013.”

“I’m so heartbroken with what has happened,” she posted on Facebook recently. “I feel numb and completely shocked with the turn of events. To have trained so hard this past year and come so far only to be humiliated and targeted by the IPC for reasons unknown baffles me. “

Arlen, 18, suffered a rare neurological disorder of the spinal cord just seven years ago. It left her paralyzed from the waist down within weeks. Then, within months, she fell into a three-year coma and was fighting for her life.

Arlen fought through and just last year, the local girl made the U.S. Paralympic swim team and not only won a gold medal in the Paralymic Games in London but she set a world record, too.

Arlen also appeared on the ESPYs this year when she was a runner-up for the “Best Female Athlete With A Disability.”

Check out the rest of the emotional message she posted on Facebook on Sunday below.

Being penalized for maybe having a glimmer of hope of one day being able to walk again is beyond sad. What message are we giving the world when we don’t encourage hope for disabled individuals? I always choose hope and encourage hope no matter the circumstance. As it stands today unfortunately I am disabled and that won’t change in the near future. As much as I’d like it to it is not a reality. To be told I’m ineligible only days before World Championships is beyond ridiculous. Being up in Montreal only to have to head home is devastating. The definite reasons given to make the ineligible decision come to pass were not clear and do not seem fair. Although there is not much I can do I just pray for answers and a reason for all of this. Everything does happen for a reason and sometimes these reasons are hard to fathom and explain. I continue to have the [utmost] respect for the Paralympic movement and the IPC and hope that this will not happen to anyone else. Nobody should have to go through this. Lastly I want to thank everyone for all of the incredible support and love. It truly means so much! Also a special thank you to everyone on Team USA for wrapping their arms around me and supporting and fighting for me. Go USA!

Arlen’s a proud Bruins fans, too, as seen in the photos below. 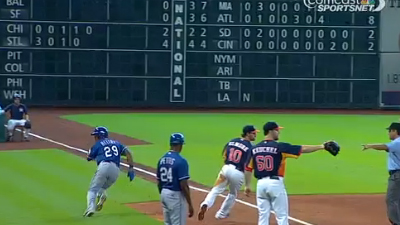