On Friday, we get our first real look at some of the players who have shined in Patriots training camp.

While there’s a lot to glean from padded practices, Friday’s preseason game against the Eagles will be the first real test for guys like Kenbrell Thompkins, Zach Sudfeld and Marcus Benard, who have stolen headlines throughout the summer. Sure, they’ve dominated their teammates in one-on-one, seven-on-seven and 11-on-11 drills, but there are limitations to all of that action.

There are plenty of positional battles to settle before the summer is over, and most of them involve those players that have starred in training camp. Thompkins is competing against his fellow rookie receivers, Sudfeld against some former NFL starters at tight end and Benard against a gaggle of young defensive ends fighting for a few roster spots.

Let’s look deeper into the top five positional battles to watch as the Patriots take on the Eagles on Friday below.

Running Back: The top three roster spots at running back will almost definitely be filled by the bell cow Stevan Ridley, third-down back Shane Vereen and special teams guru Leon Washington. It’s down to Brandon Bolden and LeGarrette Blount to battle it out for the fourth spot on the roster.

Bolden has more experience in the Patriots’ system and had a better 2012 than Blount, running for 274 yards on 56 carries. His running style more closely resembles Ridley’s, and while healthy, he looked like the better back in training camp, regularly making defenders miss with his quick cuts.

It may come down to who’s more impressive in the preseason when all is said and done. There’s only so much you can take away from a training camp practice at running back since there is no tackling. If Blount can improve his short-yardage ability, he could be the man for the roster spot. If not, some familiarity can go a long way for Bolden.

Wide Receiver: There’s no telling who will line up with the first-team offense on Friday night out of Thompkins, Josh Boyce, Julian Edelman and Aaron Dobson. Since the team will likely be running more looks with 11 personnel (one running back, one tight end), two or more of those players will find their way on the field with Danny Amendola. Thompkins has probably been the top player out of that group, but Boyce, Edelman and Dobson have all had their moments as well.

It’s likely all four players get a shot with the first team, whether Tom Brady plays or not. The Patriots will want to see what they have in the three rookies and Edelman before they have to make roster cuts and decide their starters. Kamar Aiken will also be in the mix.

Tight End: This is another positional battle that’s wide open at this point in the summer. Sudfeld, Jake Ballard, Daniel Fells and Michael Hoomanawanui are all getting equal snaps at tight end. Ballard and Fells are the best inline options, while Sudfeld and Hoomanawanui will mostly be working out of the flex position.

Sudfeld is the player with the most upside out of the group, but he’ll have to prove his blocking ability. He’s had very little chance to show himself in the run game during training camp. He’ll get plenty of opportunities in the four preseason games, though.

Defensive End: Jermaine Cunningham is hurt, which gives more opportunities for players like Jake Bequette, Justin Francis, Jason Vega, Michael Buchanan and Benard. Benard and Francis have played with the first team during training camp, while Vega, Buchanan and Bequette will likely be playing with the reserves.

Out of the above six players, there are likely four roster spots to be filled. Vega, Buchanan and Bequette are the most likely options to be on the chopping block at this point, and one will have to stand out to make the 53-man roster. Buchanan has the most upside, but there’s a reason he fell to the seventh round. He hasn’t made the impact many expected yet during training camp, but he had been working heavily on special teams.

Bequette hasn’t shown much since being taken in the third round last season. It would be a major disappointment if the Arkansas product doesn’t make it out of his second summer with the Patriots.

Safety: Unless Bill Belichick shocks the world and moves Devin McCourty back to cornerback, the defensive captain is likely to be one starter at safety this year. The other spot is up for grabs between Adrian Wilson, Tavon Wilson, Steve Gregory and Duron Harmon. Reports out of Philadelphia say Harmon appears to have passed Tavon Wilson on the depth chart. That appeared to be taking place when the Patriots were still in Foxboro, as well. Harmon is the best deep safety on the roster other than McCourty.

Adrian Wilson, Gregory and Harmon are likely to take first-team snaps next to McCourty against the Eagles. Gregory and Tavon Wilson will have to set themselves apart, as the Patriots may carry just four safeties this season. 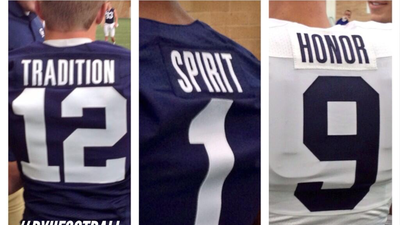