Sudfeld has been impressing ever since first putting on a Patriots uniform and debuting for media members in OTAs and minicamp. The legend of ?Studfeld? has only grown since fans first saw the undrafted rookie in training camp practice and preseason games.

Sudfeld?s big breakout performance came Friday night against the Buccaneers in Tampa Bay. He caught two passes for 32 yards and a touchdown while also adding a reception on a two-point conversion.

With Rob Gronkowski out with his back injury and Aaron Hernandez in Bristol County Correctional Facility, Sudfeld?s bandwagon is gaining steam in the fantasy community, which is only increasing the frequency that his name appears in headlines. There?s good reason fantasy experts are taking notice, too. Sudfeld is receiving snaps with the first unit as the team?s primary receiving tight end in preseason games.

At nearly 6-foot-7, 260 pounds with a 4.73-second 40-yard dash and 7.04-second three-cone time, Sudfeld is a step faster than the rest of the tight ends on the roster. And while he will still likely have to share snaps with another tight end to start the season (until Gronkowski comes back), it?s looking very likely Sudfeld will be a big part of the offense come September.

Sudfeld?s success has been a big surprise to most in New England and the NFL community, but not everyone. One of Sudfeld?s biggest supporters before the draft was The NFL Draft Report?s Dave-Te? Thomas, who has supplied the majority of NFL teams with scouting information since 1968, when he was just 14 years old. He?s been the NFL?s player biographer since 1980.

?If this kid did not have past medical issues and more than just one year under his belt in college, I am sure he would not be a Patriot at the moment,? Thomas wrote via email. ?To me, he had the same roadblocks on draft day that Arian Foster had a few years back.?

Injuries are certainly to blame for Sudfeld?s undrafted status. They?ve been well documented, but to go over them once again, he had multiple shoulder surgeries, a knee surgery, a wrist fracture, a left leg fracture and ankle ligament damage during his six years in Nevada. His only fully healthy seasons were 2007, when he redshirted as a freshman, 2010 when he served mostly as a blocker and 2012, his breakout year.

Sudfeld caught 45 passes for 598 yards and eight touchdowns as a senior. He was able to come back for that sixth season after successfully petitioning for a medical redshirt. To only look at Sudfeld?s receiving stats wouldn?t do him justice, though. Sudfeld?s blocking statistics with the Wolf Pack, via Thomas, were even more impressive.

A few of these statistics first came to light when Ben Volin of The Boston Globe wrote about Sudfeld back in June. But Thomas was able to flesh out more of what goes into those numbers.

Sudfeld had 24 ?touchdown resulting blocks? — 19 in the run game and five more on downfield blocks after catches from his teammates. Touchdown resulting blocks, as explained by Thomas, are: ?When the player serves as the lead block resulting in a TD. More often for a tight end, it will occur on a defensive end or outside linebacker, but with Zach, 11 of his touchdown blocks came between tackles on runs generated with [running back Stefphon] Jefferson carrying the ball. That is why he is ideal for the flex, as he is very quick and balanced when trying to widen the rush lanes. He has those active hands and low pad level that lets him root out a second-level defender trying to plug the holes.?

Sudfeld also shines when it comes to advanced receiving stats. The Patriots tight end had just one drop his entire senior season at Nevada and caught 70.31 percent of passes thrown his way (45-of-64). Sudfeld gained positive yardage on every pass he caught. He also converted 38 of 45 receptions for third downs and added 18 third- or fourth-down conversions and 18 catches in the red zone.

Sudfeld will likely be replacing Hernandez in the ?flex? tight end spot in the New England offense. Sudfeld has lined up in that flex role in 54 of his 66 preseason snaps, according to Pro Football Focus. He has lined up as the sole inline tight end just 12 times.

While Sudfeld hasn?t flashed his elite blocking skills yet in the preseason, he?s still well ahead of where most rookie tight ends are at this point. Due to the size/speed combination of NFL defenders, it?s normal for tight ends to flash their receiving skills before excelling in blocking. Still, Sudfeld has already looked like an improvement over Hernandez blocking in the flex role.

Sudfeld hasn?t allowed a quarterback pressure this preseason in just four pass blocking reps, but he grades out negatively in run blocking, according to Pro Football Focus.

To put Sudfeld?s 94.69 blocking consistency grade into even greater context, he?s only the third tight end since Thomas started grading blocking in 1985 to register a 90 percent or higher for the season.

?Balance, more than brute strength, is what I look for in a tight end,? Thomas wrote. ?A fullback relies a lot on leg drive, but with tight ends being generally taller, they are more upright and have to be active with their hands to get a good push or grab on his man. Zach has very nice pad level for a player his size and a wide base, which should help him compensate while developing training room strength.?

Heath Miller is the name Thomas uses as a player comp for Sudfeld. Thomas had high praise for the tight end in his scouting report.

?Sudfeld might be the ?best kept secret? in the 2013 NFL Draft Class at the tight end position,? Thomas wrote. ?He has the frame you look for in a tight end, and his receiving skills are NFL-ready. It is rare to see him short-arming balls in tight areas, and he is very comfortable playing with his hand down. He does a stellar job positioning himself and sustaining blocks, whether working in-line or attacking in the second level. The most critical aspect of drafting a talent like Sudfeld is making sure the general manager is comfortable that his injury history is behind him.?

Bill Belichick likely knew exactly what he was getting when the team snagged Sudfeld after the draft. What the head coach didn?t know, though, is how important Sudfeld would be to the Patriots? offense since Hernandez was still on the team in April and the extent of Gronkowski?s back injury was still unknown.

Obviously, injuries are still a concern for Sudfeld, since three of his six college seasons ended because of ailments. But Sudfeld has held up so far, and it?s obvious Tom Brady has confidence in his new toy. Otherwise, Sudfeld wouldn?t be receiving snaps with the first team in practice and preseason games.

Sudfeld can best be described as aloofly humble to the media in post-practice and game scrums. He passes all praise on to his teammates and gives Belichick-ian answers about his attempts to keep getting better.

?I don?t know if I would say more comfortable because you?re always just trying to continue to improve,? Sudfeld said about his development in the offense. ?And like I keep saying, it?s been good, but there?s so many things — I watch the film — that I have to get better at and to improve. So, there?s really not time to sit back and rest on what you?ve done in the previous games.?

Thomas mentioned that he and Colin Kaepernick, Sudfeld?s college quarterback, campaigned to get the 49ers to draft the rookie tight end to no avail. The scouting personnel consultant said he?ll usually let teams make their own decisions based on the information he provides, but he?ll soapbox for players he?s really willing to stand behind. Some of those past players included Tom Brady (his third-rated quarterback in 2000), Hugh Douglas, Devin McCourty and Kaepernick.

Whether Sudfeld joins that list of grand successes will likely depend on his health. His body seemed to fail on him time and time again in Reno, Nev., but so far, he?s been 100 percent since joining the Patriots.

Sudfeld?s nickname was ?Flint? at Nevada because of his propensity to spark the offense. In New England, ?Studfeld? seems to be catching on. So much so, that when Sudfeld was speaking to the media Tuesday, his teammate Jake Ballard referred to the tight end by the flattering alias. 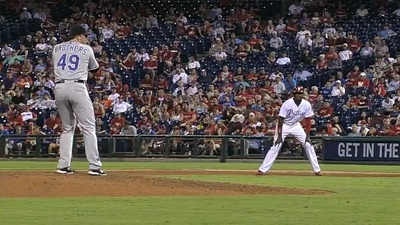