The last time we saw Gregory Campbell on the ice in the black and gold, the Bruins center was limping to the bench. He was doing so, of course, after blocking a slap shot from Evgeni Malkin during Game 3 of the Eastern Conference finals and then finishing the shift on one leg.

The impressive showing of intestinal fortitude became some sort of rallying cry for the team and its fans before the B’s eventually lost the Stanley Cup Final in six games. On Thursday, however, Campbell was back on the ice, almost three months to the day he broke his leg in that June 6 game.

Campbell was expected to be out six to eight months following surgery on the injured leg. It’s an important milestone for Campbell, who recently had something of a setback in his rehab process. Just a couple of weeks ago he was told that he wasn’t able to resume skating after X-rays revealed the tibia bone hadn’t quite healed enough.

“I actually felt the screws because of where the incision was and where the plate is,”Campbell told NHL.com in August. “So it’s underneath my skate there on the side. So when I tightened it up and I moved my ankle back and forth, I actually felt the screws, which surprised me because I didn’t think I would. But I was talking to people; I have to tweak the boot a little bit so there’s not much pressure on the area.”

Campbell is still hopeful he’ll be ready for training camp and the start of the season, and Thursday’s skate would seem to indicate he’s on the right path to accomplishing those goals.

Doc Rivers Tells Fib, Intentionally or Not, in Account of His Departure From Celtics 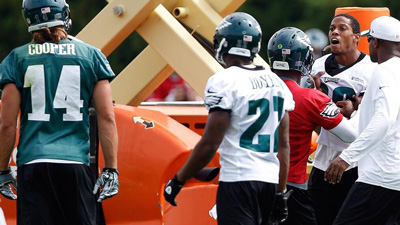