All anyone really needs to know about the possibility of Kevin Garnett donning a jersey that says “The Big Ticket” next season is this: The kids will buy one.

That’s not the lone reason the NBA is considering having the Nets and Heat wear nicknames on the backs of their jerseys next season, but it is surely one of the big ones. As more owners cry poor and labor conflicts become an expected occurrence every five to seven years, the product the league is selling is becoming less and less what happens on the floor. Be thankful, for now, that the jerseys are still the merchandise and not also the canvas, as NASCAR vehicles are.

Kicking up a fuss over nicknameplates won’t do much good. This time it’s nicknames. Soon, it will be Twitter handles. Within two or three years, advertisements will grace at least some teams’ uniforms. That is the root of this whole sleeved-jersey fad, after all: More fabric means more ad space.

And it’s not like this is a new idea. Lots of fans remember how cool it was that George Gervin‘s San Antonio Spurs jersey said “Iceman” in the way-ahead-of-its-time ABA. Ichiro Suzuki rocked his first name, which doubles as his one-word monicker, on his Mariners jersey for 12 seasons. Everybody recalls “He Hate Me” of the XFL’s Las Vegas Outlaws; almost nobody recalls Rod Smart, running back for the Carolina Panthers.

So knock yourself out, NBA. Toss “The Big Ticket” on Kevin Garnett‘s shirt or “Melo” on Carmelo Anthony‘s. Maybe Brian Scalabrine can come out of retirement for one game, just so we can see “White Mamba” lettered on his back.

Beware of how quickly this could get off the rails, however.

There are already some cracks in the plan. Shane Battier, who is apparently a grown-up man who thinks wearing nicknames is silly, wanted to make a mockery of the whole concept by wearing “Batman” on his jersey. The problem is, that name is trademarked by DC Comics, so he can’t. Battier’s teammate, Dwyane Wade, who once was known as “Flash,” won’t have any such trouble, though, because he is reportedly deciding which of his three nicknames he will submit to be used. Instead of his ubiquitous “D-Wade,” he’s supposedly partial to “Three,” a nickname that nobody calls him but himself.

The whole “player submits nickname to put on jersey” aspect is how this thing could get dicey. Is there anything worse than the guy who gives himself his own nickname and insists that people use it? A former boss of mine had a friend in college who introduced himself to everyone as “Fletch,” after the 1985 Chevy Chase movie. Everything was fine for a few months, until he took all his buddies home for Thanksgiving. While they were sitting at the dinner table, the friend’s brother asked, “Why are all these guys calling you Fletch?” It turned out the friend just decided he wanted to be known by the same name as a movie character. He never lived that down, and no one called him “Fletch” ever again.

Something that ridiculous will happen in the NBA eventually. The league has to approve all nicknames, but in this age of hashtags and online slang, it’s only a matter of time before somebody slips a double entendre past the parents in the main office. “Motor boatin'” may seem innocent, for instance, to anyone who has not seen Wedding Crashers.

Most of all, though, nicknames on jerseys just opens up another avenue of stupidity. Metta World Peace will capitalize on the phenomenon with something awesome like “Lloyd Christmas,” but not everyone is as creative. If trademark restrictions prevent Dwight Howard from wearing “Superman,” we know he’ll pick something like “Soul Glow” or “Cheezburger” or some other reference that won’t really be that funny. Prepare to groan when Kobe Bryant steps onto the floor with “Vino” or “Mamba” across his back.

It’s all in good fun, and the NBA is smart to get ahead of this now, when it is still new and attractive to the younger viewers who are the future of the fan base. But when this thing jumps the shark or an offensive nickname slips by the league’s censors, the NBA had better not backtrack with some nonsense excuse about how they did not foresee any complications when they unveiled this idea. They know. They absolutely know. Yet they also see the benefits, and they have rightly determined that it’s worth it. 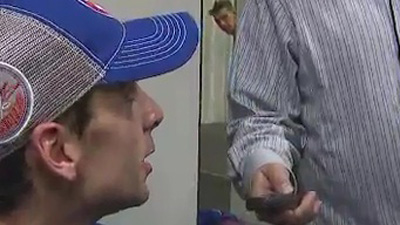