Michael Wacha‘s 15th career start is one he will remember for a long, long time.

The Cardinals right-hander came one out — and about two inches — short of becoming the first rookie to toss a no-hitter since Clay Buchholz in 2007.

With two outs in the top of the ninth, Washington’s Ryan Zimmerman drilled a Wacha fastball straight into the ground in front of home plate. The ball bounced over the mound, sailing just beyond the rookie’s outstretched glove, and shortstop Pete Kozma‘s throw to first pulled Matt Adams off the base, allowing Zimmerman to reach with the Nationals’ first and only hit.

Wacha was lifted after the at-bat, and Trevor Rosenthal came on to lock down a 2-0 win for St. Louis. The 22-year-old finished with one hit and two walks allowed over 8 2/3 scoreless innings, earning him a nice postgame Gatorade shower courtesy of teammates Edward Mujica and John Axford.

Watch Wacha’s final pitch in the video below. 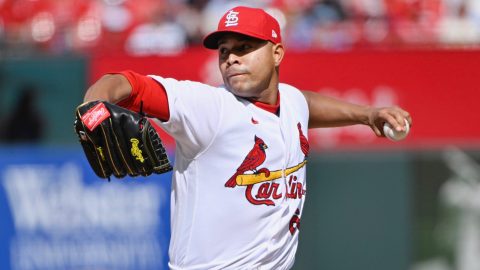