Peter King Wrote 2,000-Plus Words About Washington Redskins Without Once Mentioning 'Redskins' - NESN.com Skip to content Peter King is on a mission to civilize, and he’s taking a pretty entertaining approach to do so.

Sports Illustrated‘s lead NFL scribe has decided that his popular new NFL microsite, The MMQB, won’t be using the term “Redskins” when talking about the Washington Redskins. The first hard evidence of the site’s decision cropped up this week, when King wrote 2,746 words about the Redskins without once mentioning the team’s name.

Instead of using the nickname, King used “Washington” when describing anything about the team or mentioning any relevant player or team personnel. The action seems to be a political move from King and his MMQB pals, using their massive audience and outreach on the new site to make a statement against the oft-debated nickname.

The term Redskin is a derogatory racial descriptor for Native Americans, which has caused a widespread debate over the team continuing to use the nickname. The franchise has been known as the Redskins since 1933, when they were still based out of Boston, and loyal fans seem enamored with keeping the name, even as Native American tribes continue to move for change.

Team owner Dan Snyder has said in the past that he has no intention of changing the team’s name and NFL commissioner Roger Goodell has even defended the name as recently as this summer. Maybe King’s Redskins refusal will influence some other publications to ban using the name as well, and eventually force change within the league.

Whether it works or not, it was worth a shot. Kudos to you for the effort, fine sir. One pitch away! Really? One pitch? That’s cold. 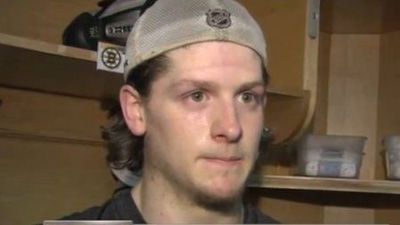 Torey Krug Getting Even More Comfortable With Bruins, Trying to Build on Stellar Postseason Performance (Video)

Report: Lamar Odom’s Drug Habit Got So Bad His Dealer Had to Cut Him Off