Report: Jared Sullinger's Assault Case May Be Dropped If Girlfriend Does Not Participate - NESN.com Skip to content Jared Sullinger may be off the hook after all.

A few hours after Charles Rankin, Sullinger’s attorney, declined to comment at a pretrial hearing that suggested the domestic violence case would proceed, Rankin told a reporter that the charges will most likely be dropped because his girlfriend does not wish to participate in the criminal process.

The fact that Sullinger’s girlfriend, Deann Smith, waited 10 hours until Sullinger was on a plane to Ohio before calling police makes it difficult for the court to push the case without Smith’s cooperation, according to the report.

“Sometimes in domestic violence cases, prosecutors can use evidence called ‘excited utterance,’ which are statements made immediately in response to a startling experience, such as a fight,” Eli Sherman of the Waltham News Tribune writes. “Statements like these, which are usually depictions or explanations, can sometimes be deemed trustworthy in court because they are unlikely to be premeditated.

“Rankin said exited utterance would probably not apply in this case because the girlfriend waited about 10 hours after the incident before contacting police.”

Sullinger, 21, was given an Oct. 28 date for another pretrial hearing Monday. He is charged with assault and battery, malicious destruction of property and intimidating a witness. 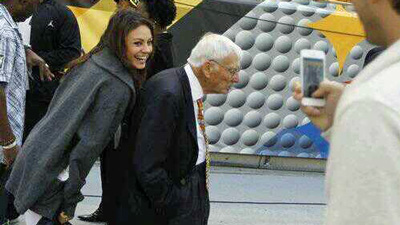