Roger Goodell Will Take Look at Redskins' Name, Says If It Is 'Offending One Person, We Need to Be Listening' - NESN.com Skip to content WASHINGTON — Commissioner Roger Goodell said Wednesday that the NFL should pay attention to those offended by the Washington Redskins nickname.

“If we are offending one person, we need to be listening,” Goodell said Wednesday in an interview with 106.7 The Fan, “and making sure that we’re doing the right things to try to address that.”

It was a subtle change in position for Goodell, who had more strongly supported the nickname in his previous statements this year.

Goodell, who grew up in Washington and was a Redskins fan, said it was team owner Dan Snyder‘s decision as to whether the name will be changed.

“But,” Goodell added, “it is something that I want all of us to go out and make sure we’re listening to our fans, listening to people who have a different view, and making sure that we continue to do what’s right to make sure that team represents the strong tradition and history that it has for so many years.”

Snyder has vowed to never change the name, but momentum for a switch has been growing this year.

The name was attacked as racist at a high-profile symposium at the Smithsonian. High schools that use the nickname have come under increasing pressure to change it. A Native American tribe in upstate New York ran a radio ad campaign against the name leading up to Monday night’s season-opener.

Another group of American Indians is planning a protest during Washington’s game at Green Bay on Sunday. Some media outlets have stopped using “Redskins.” The name is also the subject of a long-running legal challenge from a group of Native Americans seeking to have the team lose its federal trademark protection.

Ten members of Congress recently wrote Goodell asking that the name be changed. At the time, Goodell responded by calling the name a “unifying force that stands for strength, courage, pride and respect.” At the Super Bowl in January, Goodell deflected a question on the controversy by saying: “I think Dan Snyder and the organization have made it very clear that they’re proud of that heritage and that name, and I believe fans are, too.”

On Wednesday, Goodell said: “I know the team name is part of their history and tradition, and that’s something that’s important to the Redskins fans. And I think what we have to do, though, is we have to listen.”

The Redskins had no comment Wednesday on Goodell’s remarks. 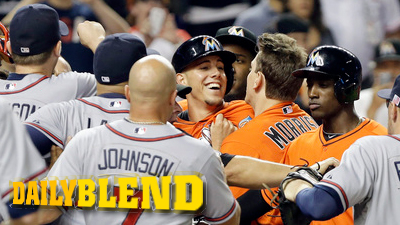 Jose Fernandez Apologizes, Says Brian McCann Talked to Him ‘Like a Dad Teaching a Kid’ After Home Run