Wayne Rooney heard the whispers, so he decided to fight back — even though it looks like he already lost a fight.

On Wednesday, the Manchester United and England star posted pictures of the head wound he suffered Saturday on his Facebook timeline. The three-inch gash, which opened up after a practice-field collision with teammate Phil Jones, kept him out of United’s loss to Liverpool on Sunday. It also rules him out of England’s FIFA World Cup qualifiers against Moldova and Ukraine on Sept. 6 and 10, respectively.

Rooney included a message for those who doubt his desire to play for his country.

“Some people seem to be questioning my commitment to the England squad and the fact I had to pull out of the 2 games,” he said. “There’s nothing I would like more than to be helping the lads in the qualifiers. I’m sure people will see from these images the reason why I won’t be able to play.”

This is not the first time Rooney has shed blood with United. He suffered a horrific thigh gash during a game against Fulham in August 2012. Unlike this time, he didn’t feel the need to prove the severity of his injury since it happened in front of a global audience. 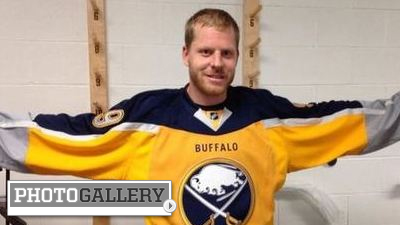 Sabres Far From First Team to Unveil New Jersey This Summer, May Also Be Worst of Bunch (Photos)