Xander Bogaerts entered the season as the Red Sox’ No. 1 prospect, and he lived up to the hype, shooting through the team’s farm system before making his major league debut in mid-August.

USA Today recognized the infielder’s meteoric rise on Tuesday, announcing Bogaerts as their Minor League Player of the Year.

Prior to his promotion to Boston, Bogaerts hit .297 with 23 doubles, six triples, 15 home runs and 67 RBIs in 116 games between Double-A and Triple-A, earning a selection to the MLB Futures Game for the second consecutive season.

Though he is a natural shortstop, the 20-year-old began taking reps at third midway through his stint with Pawtucket, and he has continued to split time between the two positions since his promotion to the majors.

The USA Today’s honor carries an impressive history. Four of the last six recipients of the award have gone on to play in an All-Star Game, and the two who haven’t are already putting together above-average careers. Jeremy Hellickson, winner of the 2010 award, went on to be named American League Rookie of the Year the following year, and 2012 honoree Wil Myers is a front-runner to do the same this season. 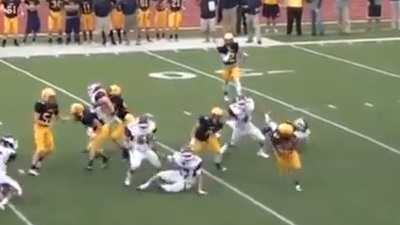