We continue with No. 5 on our list of lottery ballhogs: the Charlotte Bobcats.

When last we saw Brendan Haywood, he was popping in now and then for the Charlotte Bobcats, collecting the remainder of his $52 million contract and just trying to keep the ‘Cats out of the cellar.

He helped Charlotte accomplish the later, at least, with the atrocious Magic maintaining a firm hold on last place in the Southeastern Division, and the Bobcats were only on the hook for about $6 million of Haywood’s contract after the Mavericks opted to amnesty him in July 2012. At any price, however, the veteran 7-footer was an odd pickup for a rebuilding team that would probably be better served bringing in any guys taller than 6-foot-7 off the street for an open tryout.

Jefferson’s signing was curious not simply because he is a flawed player, but because he is just good enough to slightly improve the product on the court this season. That would seem to be the last thing the Bobcats should want, since another trip to the high lottery would mean a chance at Andrew Wiggins, Jabari Parker, Marcus Smart or any of the host of other franchise cornerstones said to be present at the top of the class.

Fortunately for the Bobcats, new coach Steve Clifford does not appear to have watched Jefferson play before.

“He immediately becomes our best offensive player,” Clifford told the Charlotte Observer in September, “with the ability to attract a second defender and make the play to get another player a good shot.”

Ideally, this is what a traditional post scorer like Jefferson, who has averaged at least 17 points and nine rebounds per game for the last six years, does. He gets the ball with his back to the basket, draws a double-team and kicks the ball out to an open shooter. The problem is, Jefferson does not do that. He can’t do that. He never has done that. Jefferson’s passing did improve in the last two years in Utah, but not enough that defenses feel they have to respect it.

While the Bobcats, in their last season before changing their nickname to the Hornets, will offer some hope for the future to Charlotte fans, this remains a team with holes. Of course, teams with holes have cracked the Eastern Conference playoff field before — just ask last year’s Milwaukee Bucks — but it seems unlikely that the Bobcats can execute a one-year turnaround with a rookie coach, a plodding big man, a combo guard in Kemba Walker who is still feeling out his role in the NBA and a second-year swingman in Michael Kidd-Gilchrist who actually needs to get the ball every once in a while.

The Celtics should be worried about the Bobcats, because at best they may run neck-and-neck in their unintentional race to the bottom. 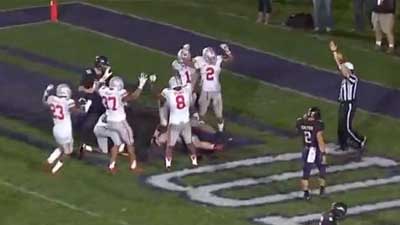 American Airlines Miss Joke, Offer to Help Matt Flynn With Flight Home After He Was Released by Raiders