It has been a rough week for former Bruins goaltenders.

Tim Thomas went down with a lower-body injury in Florida just five days ago, and now another familiar face has followed suit. Anton Khudobin has been sharing the duties between the pipes with Cam Ward this season for the Carolina Hurricanes, but in his third start, Khudobin was forced to exit the game early. After coming out of the crease to help with a clear during a Phoenix power play, the 27-year-old netminder went down awkwardly when he saw that his teammate was going to beat him to the puck midway through the second period.

Khudobin skated gingerly back to his net, but once the play was blown dead at the other end of the ice, he signaled to the bench for assistance. A couple of Canes helped him off the ice as he was unable to put any weight on his left leg. Khudboin missed the remainder of the game with what was described as a lower-body injury, and after the contest Hurricanes coach Kirk Muller said that the goaltender will undergo an MRI on Monday.

Khudobin had won his first two starts with Carolina, and he had stopped 18 of 20 Phoenix shots before being replaced by Ward.

Check out the play in the video below. 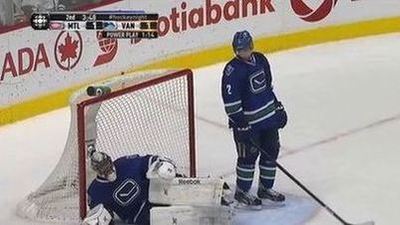