Cristiano Ronaldo is not happy with Sepp Blatter.

The soccer superstar has publicly rebuked the president of world soccer’s governing body for comments he made at the Oxford University Union in England on Friday.

When asked for his opinion on the eternal “Ronaldo vs. [Lionel] Messi debate, FIFA President Blatter made some less than flattering remarks about Ronaldo before ultimately expressing his preference for Messi, according to Sky Sports.

“They are both exceptional players but they are totally different and football is about the difference of styles, because Lionel Messi is a good boy who every mother and father would like to have at home,” Blatter said. “He’s a good man, he’s very fast, he’s not exuberant, he’s playing well, he’s dancing, he’s a kind man, he’s a good boy.

“And that’s what makes him so popular and naturally he will always get a lot of goals because he is this nice man, and he plays well and scores goals.”

“The other one [Ronaldo], this is something else. The other one is like a commander on the field of play,” Blatter said before standing up and comically marching across the stage.

“But this is the other side of football and that’s good to have such commanders on the field also,” he continued. “Because you don’t have the same attitude, and that gives life to football and one has more expenses for the hairdresser than the other, but that doesn’t matter …

“So I cannot say who is the best. The list (Ballon d’Or) will be published on Tuesday, and then the public will make the choice.

“I like both of them, but I prefer Messi.”

“I’m aware our president [Perez] has sent a letter to FIFA asking to retract what I consider to be a lack of respect to a very serious, very professional player,” Ancelotti reportedly said.

Perhaps emboldened by the support of his club, Ronaldo used Twitter to speak up for himself on Tuesday.

Ronaldo’s comments were, of course, laced with irony. The Portuguese superstar has watched in agony as Messi has claimed the last four FIFA Ballon d’Or awards (which recognizes world soccer’s top player). Ronaldo and Messi appear on the shortlist for the 2013 award and they are almost certain to be finalists. Ronaldo can reasonably claim that Blatter’s comments will influence the Ballon d’Or voting process, tilting the contest in Messi’s favor. His tweets suggest that he thinks Blatter shares some responsibility for his four-year Ballon d’Or drought.

Rather than face yet another ugly political situation, ITV reports Blatter apologized to Ronaldo and Real Madrid on Tuesday.

“Dear President [Perez], I have received your letter today, the contents of which surprised me.

“I want to clarify that for me Cristiano Ronaldo is at the same level as Messi and they are both outstanding players, each in their own way.

“I’m sorry that this situation produced in a university event hurt as much as it did, and I apologize for it.

“It was never my intention to embarrass or disrespect Real Madrid or one of their players or the fans, not only for being the founder of the FIFA club but also for being the club that I follow and admire from my youth.”

While it’s clear that Real Madrid’s influence can reach world soccer’s highest office, it remains to be seen whether the Spanish soccer giant can use its weight to help Ronaldo win the Ballon d’Or. The three finalists will be announced in early December. National-team captains and coaches will join selected media members in voting for the winner, which will be named on Jan. 13, 2014.

Have a question for Marcus Kwesi O’Mard? Send it to him via Twitter at @NESNsoccer or @mkomard, his Facebook page or NESN Soccer’s Facebook page or send it here. He will pick a few questions to answer every week for his mailbag.; 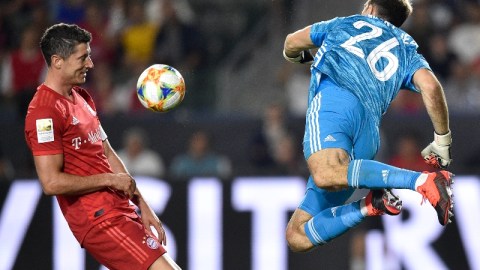