For Red Sox fans, this season has been paradise. The hometown heroes from Fenway Park have suffered through a few years of turmoil after reigning supreme as a perennial World Series contender for most of the 21st century.

While this lovable group of beard-sporting good guys awaits its ALDS foe like the cast of Duck Dynasty on a hunting trip, it’s time to start wondering which opponent could provide a tougher test for the rolling Sox.

Wednesday night’s wild-card game features two of the hottest teams in baseball in the Cleveland Indians and Tampa Bay Rays. Cleveland went 15-2 down the stretch to earn the top wild-card spot, including finishing the season on a 10-0 run. Tampa, while struggling out of the gate in September, won seven straight before a speed bump in their final series of the season against Toronto.

After David Price pitched the Rays out of their tiebreaker with Texas and into the wild card, they hand the ball over to Alex Cobb, who opposes Cleveland’s stud rookie, Danny Salazar. While some Red Sox fans are excited to see these two teams beat each other up, they shouldn’t count their memorabilia bricks just yet.

Yes, Tampa will have played two games this week before heading into Fenway should they take Wednesday’s contest. Cleveland, too, lacks the ability to line up its rotation optimally. The Red Sox, in contrast, are rested and haven’t played a game since Sunday. While this is a luxury, don’t forget what can happen to a team on a break.

Take the 2012 postseason, for example, which saw the Tigers sweep the Yankees out of the ALCS, giving them a highly touted six-day layover before the World Series. San Francisco, on the other hand, battled through a riveting seven-game series against St. Louis and then swept Detroit out of the World Series and took home the crown.

It’s not all Fenway Franks and roses for the Red Sox.

Offensively, these teams are roughly the same. Both sport a team OPS of .737, are separated by mere percentage points in batting average (Tampa wins out .257 to .255), and averaged roughly one home run per game. The biggest discrepancy comes on the basepaths, where Cleveland stole 44 more bases and held a 76 percent stolen base percentage (number of steals divided by number of attempts), compared to just 66 percent for the Rays.

By comparison, the Red Sox are better in every category. Boston hit higher as a team at .277, had a much higher .795 OPS, stole six more bases than Cleveland and rocked a stellar 87 percent stolen base percentage to show for it.

What will make or break this series for both teams, though, is their pitching.

Should Tampa advance, Matt Moore (17-4, 3.29 ERA) would pitch Game 1, while Price could pitch Game 2 and Cobb could pitch Game 3 in Tampa, the last two both on full rest as well. Don’t blink at the idea of Cobb in a potential series-clinching game at home, either. Cobb took a line drive off the head in July and missed two months, and Red Sox fans certainly remember the downfall of Matt Clement in 2005 after suffering the same injury. Cobb is no Clement, though. While the latter was never the same, the former has returned to pitch nine games, sporting a 5-1 record and a spectacular 2.41 ERA in the second half of the season. Moore’s second-half numbers improved following a midseason trip to the disabled list as well, as his ERA dropped to 2.93 over his final eight starts.

Cleveland has been terrific, too, but he doesn’t have the depth or experience to match Tampa Bay. Should the Tribe advance, the Indians will likely send out ace Ubaldo Jimenez, who hasn’t been all that spectacular in recent years but has turned it on of late. Red Sox fans remember Jimenez as the then-23-year-old ace in Colorado who held the team to just two runs in Game 2 of the 2007 World Series. After Game 1 of the ALDS Friday, they could remember him for something else.

After another rocky start to his season, Jimenez has an incredible 1.82 ERA in his last 13 starts, giving up only 17 earned runs in the entire second half. He hasn’t surrendered more than two runs since August, with three his highest earned run total since the break.

After Jimenez, things get shaky. Salazar pitches Wednesday night, and while he’s lights-out since his July debut (3.12 ERA, 1.14 WHIP, 11.3 K/9), he’s only managed to pitch six innings in a start in four of the 10 games he’s started.

Chris Perez, who started the season as the Indians’ closer, has seemingly been stripped of the title after mightily struggling in the second half. Old friend Justin Masterson was thriving in a starter’s role but has been cast into the bullpen out of necessity. Things are a mess on the Cleveland pitching staff, and that means green lights and walks aplenty for the Red Sox, the most patient and potent offense in baseball.

In 2004, the Red Sox needed to chase the ghost of the Bambino away and take down the Goliath Yankees. In 2007, they stormed back from a 3-1 series deficit to defeat the Indians. While the roster is much different, it would only be fitting that these Red Sox chase the memories of former skipper Terry Francona and beat his Indians once again on their quest for a World Series championship. 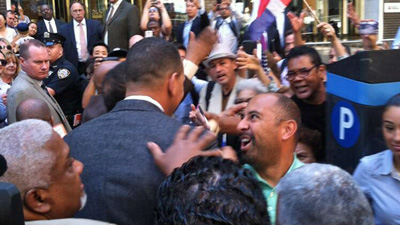 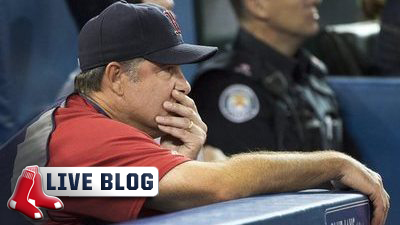