Kevin Garnett Does Not Want to Rest During Back-to-Backs, Was 'Honest' With Coach Jason Kidd - NESN.com Skip to content Rivers and Kevin Garnett butted heads at times over the last few seasons over how many minutes the veteran big man would play and against which opponents he would rest. When the Nets acquired Garnett in this summer’s blockbuster trade, new coach Kidd remarked that Garnett, 37, would probably sit the first or second game on any two-game, two-night set in the regular season.

Kidd and Garnett met to broach that topic prior to training camp, Garnett told reporters on Monday, and the conversation “didn’t go too well.”

“I’m just being honest,” Garnett told reporters. “But I understand what he’s saying. He’s just making sure I’m durable and can get through an entire 82-game season. So I’m totally understanding of what it is. … He’s looking to better me, so I’m going to try to be receptive to that.”

Garnett claimed that the decision has not been made yet. He also made clear that he would like to be included in whatever ruling Kidd and the coaching staff come to in regards to how frequently he plays.

“We’re still in wait-and-see mode,” Garnett said. “I just don’t want to be told anything. Hopefully I’ve earned the right to have an opinion on something that I’m doing. But more importantly, from a chemistry standpoint, I think it’s important for me to be out there with everybody, and I think it’ll speed the chemistry process up more quickly.”

The Nets have 20 back-to-back sets this season, the first of which comes Nov. 8-9 at Washington and against Indiana. Garnett appeared in 68 games last season and averaged 29.7 minutes per game, his fewest average minutes since his rookie season in 1995-96.

Report: Buccaneers Have Talked to Teams About Josh Freeman, Continue to Shop Quarterback 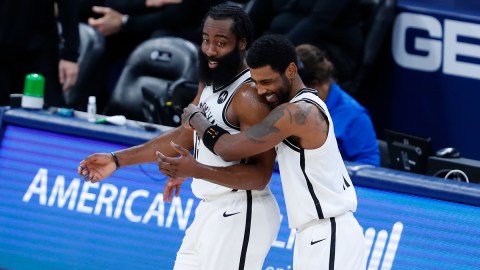