Koji Uehara Picks Off Kolten Wong at First Base for Final Out of Game 4 (Video) - NESN.com Skip to content

The Red Sox and Cardinals like to keep things interesting during their games — all the way down to the final out.

After a strange ending to Game 3 resulted in St. Louis winning on a walk-off obstruction call, the Red Sox came back in Game 4 and polished off the bottom of the ninth in their own unique way.

Kolten Wong entered the game as a pinch runner in the bottom of the frame, but with two outs and Carlos Beltran at the plate representing the tying run, the rookie was picked off at first base by Koji Uehara, securing the Red Sox’ 4-2 victory.

Uehara caught Wong straying too far from the base, and he fired a perfect strike to Mike Napoli to record the final out of the game. The rare feat also marked the first time a postseason game has ended with a baserunning out since 1936.

The Red Sox tied up the series at two games apiece, guaranteeing that the series will conclude at Fenway Park.

Check out a video of the wild play below. 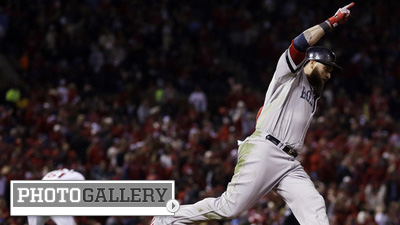