While much of the Red Sox? ALDS roster appears set, there are still a few things to sort out before Boston opens up its playoff slate at Fenway Park on Friday. The Red Sox still don?t know who they will be playing in the first round, but it doesn?t mean that we can?t speculate on what Boston?s roster will look like come Friday?s series opener.

The biggest questions surrounding the Red Sox? ALDS roster involve the look of the rotation, the final spots in the bullpen and exactly how many pitchers John Farrell will have at his disposal. Farrell said recently that the Red Sox were leaning toward carrying 11 pitchers, but he has since backed off the statement a bit, and it?s entirely possible that Boston could instead go with 10 pitchers for the ALDS.

The Red Sox are scheduled to work out at Fenway Park on Tuesday, Wednesday and Thursday this week, so it shouldn?t be long before we?re offered some clarity. No one likes to wait, though, so let?s take a stab at predicting how things will shake out.

There?s not a whole lot to this decision. Ryan Lavarnway did a nice job in a backup role during David Ross? absence, but there?s really no need for three catchers. While Jarrod Saltalamacchia will obviously be the Red Sox? primary catcher, Farrell didn?t rule out the possibility of Ross starting a game in the playoffs.

Apologies to John McDonald, Brandon Snyder and Brock Holt. But Xander Bogaerts is hands-down the best option for a fifth infielder.

Bogaerts should and likely will make the postseason roster. He doesn?t bring as much versatility as McDonald or Holt — who can play second base as well — but he?s definitely the biggest offensive threat of the bunch. He?ll serve as the backup shortstop and third baseman, and could also pinch hit for Stephen Drew against left-handers, if Farrell is feeling wild.

Here?s where things get interesting.

If the Red Sox carry 11 pitchers, it?ll be at the expense of an outfielder. Jacoby Ellsbury, Shane Victorino, Daniel Nava, Jonny Gomes and Mike Carp are all locks, while Quintin Berry and Jackie Bradley Jr. are on the bubble.

My guess is that Berry, who is capable of impacting the game with his legs, gets the nod in an either-or situation. We?ve seen the Red Sox carry players solely for pinch running in the past, and Berry has the potential to come up with a big steal late in a tight game. But the Red Sox should strongly consider carrying Bradley, too.

Farrell indicated over the weekend that he doesn’t feel the need to carry an extra center fielder to protect Ellsbury, who is just coming back from a foot injury. However, it certainly wouldn’t hurt — no pun intended — and the Red Sox should also take into account how banged up Shane Victorino has been all season. Bradley would provide some additional insurance in the event that Ellsbury or Victorino is forced to leave a game with an injury. He would also allow further flexibility, and could eventually become usable within any game if Berry pinch runs and the contest enters extra innings.

Ultimately, though, it comes down to the Red Sox? bullpen. It has become hard to trust anyone beyond Koji Uehara and Craig Breslow. The Red Sox are better off carrying Bradley, who could make an impact, than a reliever that they?re not willing to turn to in a big situation.

Jose Canseco?s not walking through that door.

The only question here is in which order these four men will take the ball.

Jon Lester is the consensus No. 1. He has been terrific down the stretch — his mediocre performance in his final start, notwithstanding — and has been here before. The Red Sox absolutely trust him to take the ball in Game 1. It?s a no-brainer.

Things are much more debatable beyond Lester. But while you could make a case for Clay Buchholz to start Game 2, John Lackey is the right man for the job, especially with the Red Sox opening up at home. Lackey is 6-3 with a 2.47 ERA in 13 home starts this season, and 4-10 with a 4.48 ERA in 16 starts away from Fenway Park.

Expect Lackey to pitch Game 2. Buchholz and Jake Peavy will start Games 3 and 4, respectively, on the road.

Uehara, Breslow, Junichi Tazawa and Brandon Workman are locks. The rest needs to be sorted out.

The Red Sox must first decide whether to carry two or three relievers in addition to the aforementioned quartet. After that, they?ll need to determine which arms will occupy those spots from what looks to be a pool of four candidates.

Morales stumbled during his final appearance of the regular season Saturday, but he has shown good stuff of late, and Farrell?s postgame comments seemed to suggest that the Red Sox have faith in the left-hander. I?d expect to see him on the roster.

Doubront essentially pitched himself off the ALDS roster by getting shelled Sunday, although he may have talked himself off the roster long before that. Doubront said that he?s willing to pitch in relief, but also pointed to some difficulty in making the transition. It?d be surprising to see him pitch this postseason.

Essentially, the 25th and final roster spot will be determined by what the Red Sox value more right now: an extra outfielder or an extra reliever. For reasons highlighted above, I?d take the outfielder, which, in this case, would be Bradley.

If Thornton had pitched well down the stretch, it?d be a different story. But the lefty didn?t do much to prove himself, so his bubble bursts. 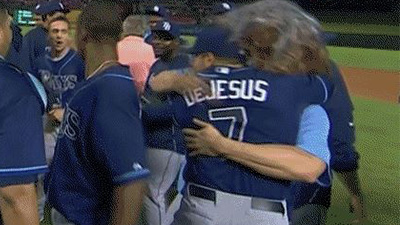