FOXBORO, Mass. — The Patriots have plenty of rookie contributors this season, but only one first-year player came out of training camp know he had a starting gig — the punter.

Ryan Allen beat out Zoltan Mesko for the starting job during training camp and the preseason and it has paid off for New England. While Mesko was released on Tuesday by the Steelers for averaging just 42.5 yards per punt (31st in the league) with a 36.7-yard net (29th), Allen has shined for the Patriots, averaging 46.2 yards per punt with a 40.4-yard net. Allen has booted 16 punts inside the 20-yard line and has forced nine fair catches. Some quality hang time has the opposition averaging just 8.4 yards per return.

Allen won two Ray Guy Awards while punting for Louisiana Tech, so booting the ball is nothing new for the native Oregonian.

Since we’re now halfway through the 2013 season, it’s time to catch up with some of this year’s rookie contributors to see how they’re adjusting to life in the NFL. Allen has the benefit of leaning on the other specialists as he adapts to the Patriots.

Who on the team have you looked to as your mentor or big brother?

Ryan Allen: Really just these two guys [Stephen Gostkowski and Danny Aiken]. These guys are veterans, especially Steve. He’s been around. He’s seen a lot here. He knows how things go, how the way things should go. And I’ve been an open book and tried to learn and soak up as much as I can from both of these guys. They’re both great. Definitely for — just going and talking and stuff like that. Steve’s got a lot of insight. He’s a great help himself. Me and Danny — Danny’s always right there. If something goes wrong or something’s there, he’s always there to talk through it and stuff like that. So I’ve got a great supporting cast right here to help me through a lot of stuff. Yeah, absolutely.

Has the season gone by quickly or slowly?

What is the hardest adjustment you’ve had to make?

RA: You know, I think the hardest thing for me was to get down that in college there’s — it’s very very easy to get complacent. Whether you’re doing very well or whether you’re just doing good and, you know, there’s no sense of urgency or panic. But once you get here, there’s an expectation and this is a professional business. And it’s a production business. Every day, whether it’s practice, whatever reps I get, I have to produce at the fullest potential that I have. So that outlook is something that’s drastically changed from college. So, definitely, I would have to say that.

What’s been the easiest adjustment from college to the pros?

RA: I think it’s just the amount of resources and opportunities that are right here in the facility that I didn’t have in college. I didn’t have the nutrition. I didn’t have the weight room that we have over there with certain machines and the regiment that we do. It allows you to be the best athlete that you want to be. It’s taking care of your body. I think that is the biggest benefit if you will, rather than something that was easy.

How has the adjustment been from Louisiana to New England?

RA: It’s definitely different. The weather — [Louisiana] is a lot calmer, warmer and it’s colder and windier up here. Just being close to the coastline. But I’m from Oregon so the colder, the wet and rain, I’m used to that environment. I don’t mind it. But playing in it, it’s — this is where you are, so once you’re out there for a while doing it in practice, it becomes the norm and you start to try to work with it instead of against it. 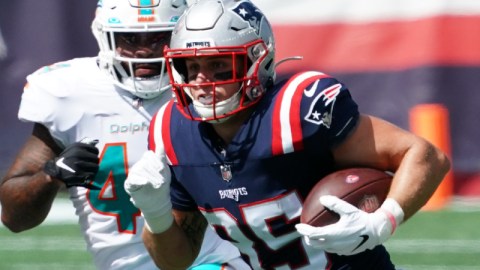