The Jaguars’ miserable season has been called all sorts of things, but “good” isn’t usually one of them.

Stumbling to an 0-5 start on the season, Jacksonville hasn’t just lost, they’ve lost by epic proportions. The Jaguars have fallen by double-digits in all of their games, and they look to be in for an even ruder awakening when they travel to Denver this weekend, with the Broncos listed as 28-point favorites in Week 6.

While the rest of the football world has all but written off the Jags, there’s one man on the gridiron who isn’t underestimating his opponent. Peyton Manning has been every bit of dominant this season, putting up staggering numbers week after week, but he doesn’t think this game will come any easier than the others, paying the winless team a rare compliment.

?We?re playing a good NFL football team. I don?t look at anything besides what I see on the tape on defense, and I see a team that?s stingy in the red zone, I see some offenses that have made some really good plays against them, that have been hard to defend. Certainly, you know, it?s a team with a lot of pride.?

In the wake of a rather mild Twitter war between the two squads, Manning makes a pretty decent peacemaker. 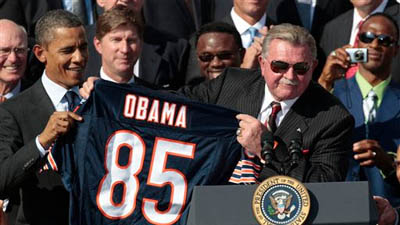 Mike Ditka Says He Regrets Not Keeping Barack Obama From Entering White House, Calls it ‘Biggest Mistake I Ever Made’