They scratch. They claw. They win.

The Red Sox did just enough Tuesday to squeak out a 3-1 victory over the Rays in Game 4 of the ALDS. The Sox, who will play either the Athletics or the Tigers in the ALCS, are now just eight wins shy of a World Series title, and it comes just one year after Boston finished in last place in the American League East.

The term ?resilience? has long been associated with this bunch, and Tuesday once again required the Red Sox to show off their trademark trait. Boston suffered a devastating defeat in Monday?s Game 3, and Tampa Bay entered Tuesday?s contest with a 3-0 record in elimination games and momentum in its corner. The Red Sox rose to the occasion, though, and they will now turn their attention to the next opponent after a hard-fought four-game battle with the Rays.

?I’m assuming that the next opponent we have is going to be as tall a challenge as Tampa is,? Red Sox manager John Farrell said. ?They pitch extremely well. They play a complete game. They’re athletic. They play very good defense. They’re well managed, obviously. You never feel like you’re comfortable going up against them. We’ve had some success against them this year, where maybe in years past it’s been a little bit different. They posed a stern challenge for us, no question.?

The Red Sox gained the upper hand early in the ALDS by virtue of two strong offensive performances in Games 1 and 2 at Fenway Park. But the Rays overcame a 3-0 deficit in Game 3 at Tropicana Field and eventually won Monday?s contest when Jose Lobaton hit an improbable walk-off home run against the typically dominant Koji Uehara. It was clear at that point that the Red Sox would need to grind out the series, and Game 4 was certainly a grind.

The Red Sox loaded the bases with no outs against Jeremy Hellickson in the second inning Tuesday, and Joe Maddon wasted no time in giving his starter the hook. Maddon summoned Jamey Wright — the second of nine pitchers used by the Rays — from the bullpen, and the 38-year-old escaped the jam unscathed by way of a strikeout and a double play.

?When we lined into the double play [in the second inning], it felt like that was — kind of took the air out of our sails a little bit,? Farrell said. ?The one thing this team has done throughout the course of this is continue to build opportunities. And even though we may come up short at times, it felt like we would still create some.?

The Red Sox put at least one runner on in the third, fourth and fifth innings, yet they couldn?t push across a run against the combination of Matt Moore and Alex Torres, and the Rays eventually struck first in the sixth inning. Yunel Escobar led off the bottom of the sixth with a double off the left field wall, and David DeJesus knocked him in with a one-out RBI single into right field.

It wasn?t long before the Red Sox finally broke through, though. Xander Bogaerts pinch hit for Stephen Drew in the seventh inning and worked a one-out walk, and Jacoby Ellsbury singled into right-center field with two outs to put runners at the corners for Shane Victorino.

Maddon called upon Joel Peralta with Victorino coming up, and the right-hander fired a wild pitch that allowed Bogaerts to scamper home while Ellsbury, who was running with the pitch, moved all the way to third base. Victorino then gave the Red Sox a 2-1 lead by legging out an infield single on a slow roller to short.

Dustin Pedroia added one more run with a sacrifice fly in the ninth inning, and the rest was history.

?This was a very unique game,? Farrell said. ?We faced nine different pitchers, and early on we had to remain patient, not making wholesale changes with our lineup, not knowing who they might go to next. We break through in that seventh inning for two runs. And I can’t understate how important Pedey’s sacrifice fly in the ninth was to give us a breather with Koji on the mound. It was more testing our patience early on and not making wholesale changes to the lineup.?

In many ways, Tuesday?s clincher showed exactly why the Red Sox are so dangerous. Even when there isn?t much working for them offensively, they still seemingly create something out of nothing. The Sox did not have a single extra-base hit in Game 4, yet they manufactured enough runs to complement a solid pitching performance from Jake Peavy and the bullpen combination of Uehara, Junichi Tazawa and Craig Breslow.

?We prepared all year long, from day one in spring training, every day we prepare,? Victorino said. ?We speak as a team, our players in the dugout. We talk about what you saw, your at?bat, how he might be pitching you, what he might be throwing today, what he’s throwing no strikes, what he’s not throwing for strikes. That’s one thing our team has done all along, we pass on the information. Whatever it takes, on the bases, at the plate, from a pitching standpoint. So that’s part of the game.?

The Red Sox won?t know who their next opponent is until the A?s and Tigers wrap up their series in Oakland on Thursday night. But right now, it might not matter.

Many of the same key phrases have been used to describe the Red Sox all season — resilient, relentless and aggressive, to name a few. But there?s one word that?s been used perhaps more than any other when it comes to the American League?s top seed, and it’s ultimately what this team has been all about. 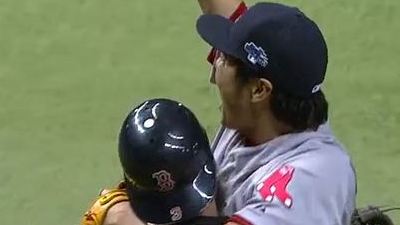