Game over: That does it for Wednesday’s simulated game.

Believe it or not, the Red Sox won. “Dirty Water” played out the Fenway Park speakers at the conclusion of the game, and the fans who decided to take in some free baseball gave the club a nice ovation as the players walked off the field.

This game was all about doing some fine-tuning before Friday’s ALDS opener. The biggest takeaway was that Felix Doubront pitched, while Matt Thornton did not. We’ll see if that turns out to be an indication of Boston’s final roster spot.

Mid 6th, Blue 1-0: The fact that Felix Doubront pitched and Matt Thornton did not could be telling.

Doubront tossed a 1-2-3 inning. He struck out Quintin Berry and Jarrod Saltalamacchia as part of the perfect frame.

John Farrell said Wednesday that the Red Sox will carry 11 pitchers on their postseason roster, which likely means that either Doubront or Thornton will make it. Thornton appeared to have the upper hand given Doubront’s shaky outing Sunday, but Doubront’s appearance in this intrasquad game says otherwise.

Brandon Workman will pitch the final half inning.

End 5th, Blue 1-0: Franklin Morales is somewhat of a wild card going into the postseason. It looks like he’ll be on the roster, but it’ll be interesting to see how he’s used.

Morales tossed a 1-2-3 inning in the fifth. Ryan Lavarnway and Dustin Pedroia struck out, and David Ortiz was retired on a fly ball to deep center field.

Felix Doubront, who is seemingly battling with Matt Thornton for the final playoff roster spot, will take the hill next.

Mid 5th, Blue 1-0: Jackie Bradley Jr. singled with one out in the fifth. He has two hits, as he also led off the game with a single.

Franklin Morales will now pitch. Amazingly, he’s wearing the same color jersey as the rest of his team. That hasn’t always been the case today.

Craig Breslow walked Stephen Drew and Will Middlebrooks, at which point the two teams ended the frame and switched things up.

Koji Uehara will now get in some work.

Mid 4th, Blue 1-0: Mike Carp hammered a line drive to the warning track in center field to begin the fourth inning. It resulted in a double.

David Ross, Xander Bogaerts and Brandon Snyder were then retired in order by Ryan Dempster.

Ross grounded out, Bogaerts popped out into the middle of the infield and Snyder flied out to right field.

Craig Breslow — wearing red — will enter for the blue team.

Berry made a sensational diving play in right field in the third inning to rob Dustin Pedroia of extra bases. Berry was completely outstretched.

John Farrell said earlier that Berry is more comfortable in center field. Berry looked pretty comfortable ranging into the right field corner on that play, though.

David Ortiz was also robbed during John Lackey’s scoreless inning. He hit a ground ball into the shift on the right side.

Ryan Dempster — wearing a blue jersey — will now come on to pitch for the predominantly red team.

Mid 3rd, Blue 1-0: Jacoby Ellsbury tattooed a ball off the center field wall with one out.

Ellsbury moved up on a flyout to right field. He didn’t cross the plate, though, as Jarrod Saltalamacchia grounded to the right side.

John Lackey will now take the mound and pitch for the blue team. He’s wearing a red jersey.

End 2nd Blue 1-0: When indicating the score, I use the terms “blue” and “red” loosely, as Quintin Berry — wearing a blue jersey — just batted for the red team.

Anywho, Jake Peavy’s no-hitter was broken up with one out in the second inning.

Daniel Nava and Stephen Drew hammered singles, but Peavy didn’t surrender a run. Berry grounded to the right side to end the inning.

Both Mike Napoli and Will Middlebrooks struck out.

David Ross and Brandon Snyder both grounded to Will Middlebrooks at third base.

John Farrell elected to use the shift with Ortiz batting and two outs.

It’s also worth noting that Quintin Berry is playing the outfield for both teams. He’s playing center field for the red team and right field for the blue team. What a guy.

Mid 1st, Blue 1-0: Clay Buchholz took the mound for the red team, and he gave up a first-inning run.

Jackie Bradley Jr., who probably won’t make the Red Sox’ ALDS roster with Boston electing to go with 11 pitchers, led off with a hot-shot single into right-center field. Looks like he’s still trying to make the case for a roster spot.

Jacoby Ellsbury — wearing a red jersey on the blue team — dropped down a sacrifice bunt. Jarrod Saltalamacchia knocked in Bradley with a lined shot down the right field line.

Jonny Gomes and Mike Carp lined out in the inning.

The Red Sox held their second day of workouts Wednesday. The day will culminate with a simulated game in which both Clay Buchholz and Jake Peavy will pitch.

There will be two college-level umpires for this game, and both teams are using the home dugout. The whole idea is for the Red Sox to get up to game speed before Friday’s ALDS opener.

The game is scheduled for six innings. 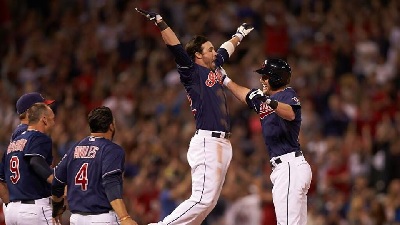