Oakland A’s fans can argue that their team got Jeffrey Maier‘d on Tuesday night in Detroit.

With the Tigers trailing by one in the bottom of the seventh inning, Victor Martinez lifted a fly ball deep to right field that appeared to have just enough gas to clear the wall. Right fielder Josh Reddick leaped in an attempt to rob his former Boston teammate of a home run, but a pair of fans made contact with the ball before it could reach Reddick’s glove.

The Oakland outfielders threw their arms up in protest, claiming the ball had been interfered with, but after a video review, the umpires declared that the home run would stand.

Detroit went on to add another run in the inning and three more in the eighth en route to an 8-6 win, setting up a winner-take-all Game 5 on Thursday for the right to take on the Red Sox in the ALCS.

Reddick expressed his frustration over the call after the game, saying he was positive he would have been able to haul in Martinez’s fly ball had the fans not beat him too it. Does he have a case? Check out the GIF (via @cjzero) and video below to decide for yourself. 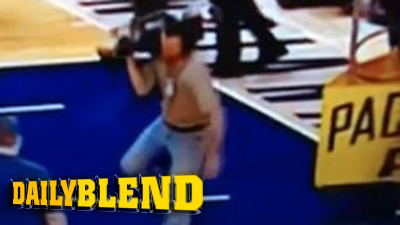 Cameraman’s Leg Fails Him As He Tries to Get Up, Causes Him to Lurch Around Court During Pacers-Bulls Game (Video)