As a 22-year-old rookie, Wil Myers does not have a whole lot of experience playing right field at Fenway Park.

That was apparent during the fourth inning on Friday, when the Rays outfielder allowed a David Ortiz fly ball to drop behind him on the warning track for a ground-rule double. It appeared that Myers thought he was called off on the play, and instead of recording a routine first out, the miscue allowed the Red Sox to put two runners in scoring position with nobody out.

Boston trailed 2-0 at the time, but the Red Sox bats — and the Fenway crowd — exploded after Myers’ blunder. After Mike Napoli popped out for the first out of the inning, Jonny Gomes smacked a double off the Green Monster, scoring Dustin Pedroia and Ortiz to tie the game.

Jarrod Saltalamacchia went down swinging for the second out, but Stephen Drew followed by beating out an infield single, with Gomes sprinting around to score from second. Will Middlebrooks then roped a double to left, scoring Drew with Boston’s fourth run of the frame.

Middlebrooks galloped to third when Jacoby Ellsbury reached on a dropped third strike, and Shane Victorino brought him home with another base hit to give the home team a 5-2 lead in Game 1 of the ALDS.

Check out the play that started it all in GIF form below, courtesy of @cjzero. 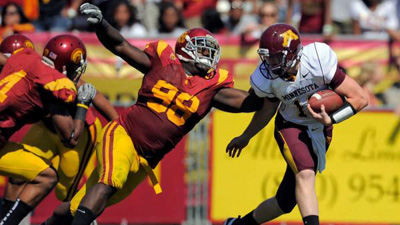