Down two games to the Cardinals, Los Angeles didn’t have much to be cocky about in Game 3 of the NLCS, but don’t tell that to Yasiel Puig.

The Dodgers star outfielder struggled mightily in the first two games of the series, going 0-for-10 with six strikeouts against St. Louis. The rest of the Dodgers weren’t doing much better, though, hitting just .184 in the series and only driving in two runs in 22 innings.

Puig helped his team break out of their offensive slump in a big way on Monday night, but it wasn’t as big as he had originally thought. The rookie outfielder drilled a ball off Adam Wainwright in the fourth inning that Puig was sure was out of Dodger Stadium. Puig gave the bat flip of all bat flips and struck a pose at home plate, admiring his shot before he realized that his hit wasn’t going to clear the right-field wall.

Puig ended up with an RBI triple on the play, putting the Dodgers up 2-0, but Puig wasn’t done yet. Although he was celebrating about 90 feet short of where he thought he would be, Puig capped off his hit with a little more of that special something that makes him one of the most electrifying players in the game.

Check out Puig being Puig in the GIFs below. 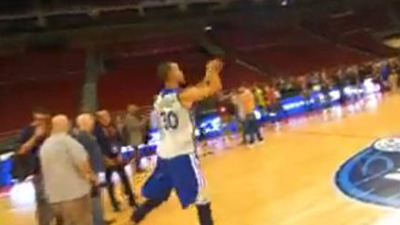