Bill Russell Statue Right Where It Belongs at City Hall, Location Befitting His Impact Beyond Sports - NESN.com Skip to content BOSTON — The applause might have gone on forever, if not for Bill Russell cutting it off.

With that, the dozens in attendance at a ceremony in his honor ceased their clapping and cheering. It was a reminder that the giant on stage may have just unveiled a statue that was at least a foot taller than he was, but that the man himself remained larger than life.

The unveiling of a statue to honor Russell on Friday was in some ways long overdue and in some ways right on time. The placement at City Hall Plaza was half a mile from the site of the old Boston Garden, where Russell performed the athletic exploits that made him famous, but in many ways it was a more sensible location. And the event itself, which was billed as a massive public event, had to be scaled back and the main portion moved indoors due to inclement weather.

So much about the circumstances were imperfect, in fact, that it became the perfect homage to a figure whose very existence and relationship with the world around him was always less than perfect.

“This is really embarrassing, because I don’t know what this is all about,” Russell said to the gathering, which included Jim Brown, Elgin Baylor, Julius Erving, and dozens of the biggest names in African-American athletes’ fight for civil rights. “All I’ve ever done was try to never shame my father.”

The theme of love within his family and among his friends prevailed in Russell’s remarks, which ran over 30 minutes before his daughter, Karen Kenyatta Russell, came to give him the hook. Even then, Russell was playfully defiant, telling his daughter, “You want me to shut up?”

The crack and his cackle drew laughs largely because, no, nobody wanted him to shut up.

Amid the grinning and back-slapping of the day, it was tempting to forget how hard Russell had it in Boston. The city did not like him, and he returned the sentiment. One of the city’s richest and most famous residents, Russell found it difficult to find an affluent neighborhood that would take him and his family. When he went on the road and had to suffer the indignity of Jim Crow, it only made coming back to Boston more frustrating — because here, people were supposed to know better. He always said he played for the Celtics, not for Boston.

In the 44 years since his retirement from playing, Russell’s image has undergone an overhaul. It was not a public relations-fueled overhaul, however. The stories didn’t change. His fierce belief in fairness and inclusion did not change. He simply let his work for racial equality, his dedication to youth mentoring programs and his words in works like his memoir, Second Wind, speak for themselves. He was ahead of his time, and he stayed ahead of his time. Meanwhile, the rest of the world caught up.

“Bill Russell carried the weight of our ignorance and intolerance on his shoulders,” Emmy Award-winning actress Alfre Woodard said in a moving soliloquy.

That ignorance and intolerance has moved some to claim that the site of Russell’s statue, so far from where he won his 11 championships, is itself an injustice. The argument says that by placing Russell’s statue at City Hall, Boston is effectively hiding it from Celtics fans, rather than putting it at TD Garden, where fans would be able to see it and remember Russell’s contributions to the franchise every time they passed in en route to a Celtics game.

In reality, the opposite is true. Putting the statue at a sports venue, in a relatively low-density area of the city, would have been the disservice. In contrast to the long-held political indifference toward the city’s diversity, the driving force behind the statue project was Mayor Tom Menino. Gov. Deval Patrick, a black kid from Chicago whose dreams of playing professional basketball were dashed when he grew up to be only 5-foot-9, spoke glowingly of Russell’s influence on him at Friday’s ceremony. Their politics aside, Patrick and Barack Obama had the path to their positions blazed by Russell becoming the first black coach in NBA history.

Placing the statue in the heart of Government Center, mere steps from some of the busiest tourist sites in the city, sent the message that society has changed to fit Russell’s ideal. A statue to Russell the man, surrounded with 10 granite blocks signifying the qualities he deemed important, in the shadow of the seat of the city’s government, means far more than a statue to Russell the basketball player, built in the shadow of a modern sports megaplex.

With all due respect to the other sports legends of this city, Russell is different. It is fine to label Larry Bird, Bobby Orr, Ted Williams and Tom Brady as the premier members of Boston’s sports royalty, because Russell occupies a class just above them. None of them matched his accomplishments as an athlete and none matched him as an activist — never mind matching those things together.

And then, there’s this: Russell does not think anything he did is a big deal. He views his 11 championships as a product of being a good teammate. He sees his dedication to social justice as something any caring person should possess. He assumes his faith in his friends and family is a natural outgrowth of love.

“I look into this audience and I see friends, relatives, and I realize how extraordinarily fortunate I have been in my life,” Russell said. “Of all the things that have happened to me in my life, the single most important thing is the friends that I have made. My friends have no race, no color, no religion — or not — no political views — or not. If I can come to the conclusion that they are good people, that’s all that matters.”

Sports, by contrast, celebrate the exceptional. Placing Russell’s statue in a sports setting would have implied that he was merely an athlete, and one that deserved praise over his teammates at that. Instead, on the concrete outside City Hall, Russell will hand a basketball to all who might visit him, sports fans or not, and invite them to sit on one of the blocks of granite by his side.

Those are the types of people Russell wants to visit his statue, not just some jersey-clad wahoos who know him only as a retired No. 6 and a bunch of green-and-white banners.

“I’ll be perfectly satisfied to be buried in an unmarked grave,” Russell said, “because if you really, seriously believe in God, no joking about it or anything, he does not need a marker to find you — and I don’t care if anybody else finds me.” 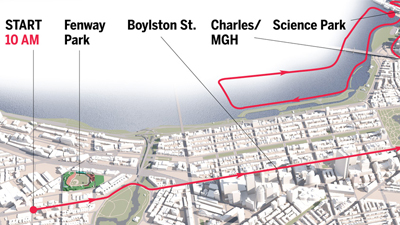