Editor?s Note: Future Watch is a weekly feature that looks at the performance of the Bruins? top prospects.

All stats are from AHL competition unless noted otherwise.

Analysis/Notes: Spooner played three games for the P-Bruins last week and tallied a goal, an assist and 12 total shots on goal. He’s now tallied a point in four of his last seven games in Providence, and he scored a beautiful shootout goal in Friday’s win over Bridgeport.

In addition to improving his well-rounded offensive game, Spooner also needs to be a more aggressive/physical player in all three zones, which will help him develop the defensive skills required to be a two-way center in the NHL.

When will he be back in the NHL? It’s tough to say, but don’t expect him to make another appearance in Boston unless an injury opens up a roster spot. Analysis/Notes: An elbow issue has bothered Morrow this week, and he missed Providence’s game on Friday against Bridgeport. He did play in the team’s two prior games and tallied one assist with seven shots on goal.

The Bruins called up physical defenseman in Kevan Miller to replace the injured Dennis Seidenberg for Thursday’s game against the St. Louis Blues, and this wasn’t a surprising decision based on Morrow’s injury and the fact that he doesn’t quite fit in (at this stage of his development) with Boston’s heavy style of hockey as well as Miller.

From an offensive standpoint, Morrow is NHL-ready. He’s a puck-moving defenseman capable of quarterbacking a power play and providing consistent offensive production from the blue line, but he lacks the strength and defensive awareness to play 12-18 minutes against NHL players. Analysis/Notes: Svedberg has struggled for most of November with a 2-2 record, a .850 save percentage and a 4.27 GAA in four starts (total of five games played).

There’s no question that the Swedish goaltender has struggled to continue his fine form from last season, but in fairness, his two best defenseman from 2012-13 (Torey Krug and Matt Bartkowski) are now full-time NHLers and unlikely to ever go back to the P-Bruins.

With that said, Svedberg needs to give the P-Bruins a chance to win by playing better in the first period. Providence has a high-powered offense capable of scoring three-to-four goals on most nights, but when Svedberg allows three or four goals in the opening 20 minutes like he did in on Nov. 15, it’s tough for his teammates to mount a comeback.

To his credit, he bounced back well on Friday with a stellar first period against Bridgeport, and he was also fantastic in the shootout. Luckily for Svedberg, his backup Malcolm Subban is also playing mediocre, so it doesn’t appear that he’s in danger of losing his starting job anytime soon.

Analysis/Notes: Khokhlachev has started to become a more consistent scorer with at least one point in five of his last eight games. He hasn’t been scoring a ton of goals, but the Russian forward is really starting to develop his playmaking skills by looking for his teammate’s offense. His vision, offensive awareness and ability to make pinpoint passes in traffic have improved from last season, which is an encouraging sign.

Khokhlachev is still a young player in the early stages of his development, but he’s quickly becoming one of Providence’s most exciting forwards. Analysis/Notes: Subban’s two-game winning streak ended last Sunday in a 4-3 overtime loss to the Portland Pirates. He stopped 24 of the 28 shots he faced.

Becoming a consistent player is one of Subban’s main goals right now, and that will come with more experience. To his credit, he has been much better in November than he was in October. His GAA has improved by two goals this month and his save percentage has also increased.

Updated Prospect Rankings (as of Nov. 23) 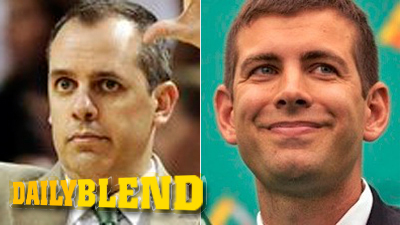 Frank Vogel Mistaken for Brad Stevens More Than Once During Pacers’ Visit to Boston, Says It’s ‘Not Uncommon’