He may coach in the Quebec Major Junior Hockey League, but Éric Veilleux‘s tantrums on the bench are NHL-caliber outbursts.

The head coach of the Baie-Comeau Drakkar didn’t agree with a call during the second period of Friday night’s game, and he didn’t exactly handle his displeasure in a rational way. Not surprisingly, Veilleux also didn’t agree with the explanation he received from the official, but as the referee was skating away, the coach decided he wasn’t done with the conversation.

Veilleux made a bad situation worse, taking sticks out of six of his player’s hands to really hammer home — or rather, heave home — his anger at the whistle. While the first couple of players were surprised by the violent stealing of their equipment, the last couple of guys to lose their sticks couldn’t hide their smiles at the bizarre situation, even helping out their coach by raising them toward the throw-happy man in charge.

Veilleux has since been fined $1,000 and given a two-game suspension for his actions.

Check out the meltdown in the video below.

Richie Incognito Has ‘Some Demons,’ Has Had These Issues for ‘Quite Awhile,’ Says Former Teammate Josh Brown 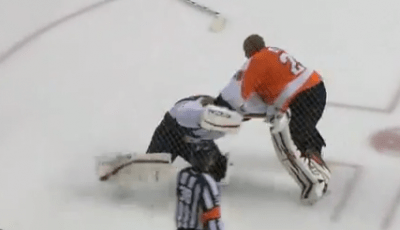