Then the third and fourth quarters happened and the end result was not nearly as positive for the Celtics. They let the Bucks whittle away at a 22-point lead before giving it away in the closing minutes to remain winless on the young season.

Vitor Faverani posted an impressive performance with 12 points, 18 rebounds and six blocked shots. Brandon Bass and Jeff Green combined for 30 points and 18 boards, and the Celtics outrebounded the Bucks 52-41.

When they were not cleaning up their own misses or getting out and running, though, the Celtics weren’t able to do much on offense. They totaled only 13 assists on 34 field goals and committed 17 turnovers while forcing just seven — and only one after halftime.

Zaza Pachulia was huge in the second half with 16 of his 20 points. He was also as flopperrific as usual.

Fourth quarter, :15.1, Bucks 103-98: There goes that. Whatever the play drawn up, the Celtics never got a chance to run it. Caron Butler stripped Gerald Wallace, Nate Wolters raced down the other end and was fouled in the act of shooting a layup, and Wolters hit both freebies.

Brandon Bass has gotten aggressive in crunchtime, and it hasn’t worked out for the Celtics. On a missing driving layup, Gerald Wallace was whistled for fouling Pachulia while going for the offensive board. Pachulia hit both free throws and the Celtics now have possession, but trail.

Caron Butler completed the Bucks’ comeback from 22 points down to tie the game on an improbable, heavily contested three. At the other end, Brandon Bass was not as lucky with his heavily contested jumper, but Vitor Faverani saved the day by chasing down the offensive board.

After the ball swung around the perimeter, Gerald Wallace canned a wing three to put Boston back into the lead.

Fourth quarter, 6:34, Celtics 90-86: Let Khris Middleton dunk. And Giannis Antetokounmpo. And everyone on the Bucks.

Middletown picked off a pass at the top of the key on the defensive end and cruised in for a flying two-handed jam. That followed an even more acrobatic throwdown by Giannis (not typing his last name again, sorry) earlier in this game.

The Celtics’ lead is down to seven points as their offense has ground to a halt. Without the defensive stops and second-chance points they had in the first half, the Celtics have seen their lead dwindle.

Vitor Faverani does have his first career double-double with 10 points and 15 boards, and Kelly Olynyk followed a missed hook by Faverani with a putback layup. But those sort of hustle plays, which were common in the first half, have been harder to come by since halftime.

One guy who has been hitting the glass is Jeff Green. He now has 10 rebounds, eight of which have come in the second half.

End of third quarter, Celtics 82-71: The Celtics have slowed down the pace and they are paying for it. What was once a 22-point advantage is down to just 12 points after a weird end-of-quarter series.

After the ball got caught between the hoop and the backboard, there was a jump ball at center court. Jeff Green won the jump, but the Celtics did not secure possession. That allowed Khris Middleton to grab the ball and attempt a last-second shot — but he was fouled, sending him to the foul line for three shots.

The fans didn’t like the call, but it was undoubtedly the right one. With 00.3 seconds on the clock, what else would Middleton have been doing than attempting a halfcourt heave?

More to the point, the Celtics must get back to active rebounding and defense that marked the first half in order to hold onto this win.

Third quarter, 3:55, Celtics 74-58: Jared Sullinger is still getting the rookie treatment from the referees, it appears.

Zaza Pachulia floored Sullinger with a swing-through elbow that did not draw a call. At the other end, Sullinger bumped Pachulia to try to get position at the elbow — sending a flopping Pachulia to the parquet.

Third quarter, 7:37, Celtics 70-50: If all Brandon Bass could do was play hard and be built like a Clydesdale, he’d have a place in the NBA. But with his consistent jump shot, he’s become a vital part of these Celtics.

Bass has been a busy man with five of the Celtics’ first seven points in the second half. He jab-stepped defender Ilyasova off to drop in a feathery soft jumper from the right baseline to stretch Boston’s lead to 20.

End of second quarter, Celtics 63-47: Some of the things Stevens has these guys doing on offense is pretty cool.

Gerald Wallace and Vitor Faverani put an exclamation point on the first half with a nifty halfcourt play. Wallace isolated on the right block and posted up. Bradley made the entry pass and cut through, drawing down Faverani’s defender from the high post, allowing Faverani to slip into the lane for a dish from Wallace and a dunk.

Offensive execution is only part of how the Celtics have built this double-digit lead. They are controlling the glass 28-19 and holding the Bucks to 40 percent shooting. The injury-related absences of Luke Ridnour and Brandon Knight have effectively left the Bucks in the same boat as the Celtics, without a real ballhandler, and as a result the Celtics have just eight dimes.

Gary Neal leads all scorers with 13 points. Brandon Bass and Jeff Green lead the Celtics with 10 points and 11 points, respectively, while Faverani has a game-high 11 boards and four blocked shots already.

Second quarter, 5:40, Celtics 49-37: Courtney Lee’s night got off to an inauspicious start. He missed a layup moments after entering the game in the first quarter, but has been a machine since then.

Lee has nine points on 4-of-6 shooting, including a bank shot runner and a short floater on the last two possessions. He has also been active defensively, although Faverani’s failure to hedge on a screen left Lee out to dry and gave Nate Wolters and easy floater.

Second quarter, 8:48, Celtics 41-29: Gerald Wallace’s unselfishness is sort of amazing. Not many 31-year-old former All-Stars would be as attentive to playing within the offense on a rebuilding team as Wallace is.

Wallace, who has taken just one shot, bounced a perfect pass to Kelly Olynyk in the mid-post for a short jump shot. Plays like those by Brandon Bass, Courtney Lee and Wallace — vets who could sulk but haven’t — are keeping the Celtics competitive.

(Although it would help the tanking job if they would be more selfish. So maybe they’re being selfish by not being more selfish?)

End of first quarter, Celtics 29-16: What are the Celtics doing? Don’t they know they’re fumbling away Ping-Pong balls?

The Celtics shot a blistering 65 percent in the first quarter and held the Bucks to just 8-for-26 shooting, while outrebounding Milwaukee 15-10. The return of Jared Sullinger was supposed to help their rebounding, but it’s been Bass all over the offensive glass and Faverani nabbing the boards at the other end with a game-high six rebounds so far.

The Celtics are now honoring Bill Russell, who was recognized in a ceremony after a statue of him was unveiled on City Hall plaza this afternoon.

First quarter, 5:10, Celtics 16-4: When the Celtics defend, it will always look this easy.

The Celtics have hardly missed a shot as they have held Milwaukee to 2-for-14 shooting and forced three turnovers. Although Larry Sanders was able to disrupt a Brandon Bass dunk, Vitor Faverani was able to clean up the mess with a putback slam. Just now, Avery Bradley gobbled an errant pass from O.J. Mayo and found Jeff Green at the other end for a dunk.

The Celtics’ big lineup with Green at shooting guard has led to some weird cross matches. Bass has been covering Mayo a lot on defense and Gerald Wallace has brought the ball up frequently when the Celtics have not been in transition.

First quarter, 7:04, Celtics 8-4: Five minutes into the game, the teams are a combined 5-19 from the field. The Celtics have committed four turnovers and the Bucks are 0-for-3 on 3-pointers.

7:40 p.m.: Rajon Rondo addressed the crowd at halfcourt wearing a khaki suit and a fake beard. The crowd loved it.

6:21 p.m.: If you missed the statue unveiling this afternoon — and chances are you did, due to the weather — and you’re at TD Garden, you can still applaud Russell. The Celtics will honor him after the first quarter of tonight’s game with a brief ceremony.

5:57 p.m.: After an emotional afternoon at City Hall and the State Room for the unveiling of the Bill Russell statue, Brad Stevens and the Celtics get down to business for their home opener.

Stevens has been looking forward to this game for some time, but mostly just to get it out of the way. He said he felt no first-game jitters about an hour and a half before tip-off.

“No, not really,” Stevens said. “I’m looking forward to it and I’m excited, but I’ve got a job to do. I’m going to try to do it to the best of my ability, and the emotions are getting to sit and listen to Bill Russell today, getting a chance to honor him at the end of the first quarter.

“To me, that’s an emotional thing because it’s something that’s been earned over the course of time. He’s impacted people not only here but that lived a long way away like myself. I grew up in an era after he was done playing and it still had a huge impact on me.”

8 a.m. ET: In the Year of Riggin’ for Andrew Wiggins, the Bucks figured to join the Celtics among the teams battling for a spot at the bottom of the standings for the right to draft the Kansas phenom.

Then the Bucks went out and outscored the Knicks 52-34 in the second half of a loss in New York in their season opener, and it’s safe to wonder if these Bucks might not be so awful after all.

The Bucks (0-1) remain on the road to begin their season with a visit to TD Garden for the home opener of the Celtics (0-1). Like the Bucks, the Celtics posted an uneven performance in their opener, but unlike the Bucks, the Celtics did not have such clear-cut promising aspects. Still, the Celtics managed to come out of their game without any injuries, which is more than the Bucks can say. Point guard Brandon Knight had to leave Milwaukee’s game with a strained hamstring and is listed as doubtful against the Celtics.

Knight joins a crowded injury report for Milwaukee. Guard Luke Ridnour is also doubtful, while Ekpe Udoh and Carlos Delfino are also out after their offseason surgeries. Of course, with Rajon Rondo sidelined indefinitely, the Celtics aren’t about to feel bad for the Bucks. 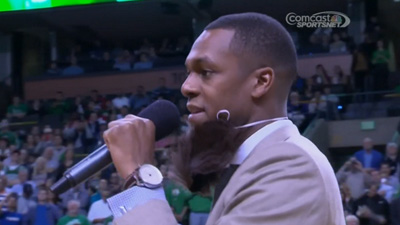 Report: FAU Coach Carl Pelini Resigned Because of Allegations of Marijauna, Cocaine Use