There were a number of touching moments surrounding the Boston Marathon finish line during the Red Sox’ 2013 World Series championship parade, and David Ortiz added to the tributes.

Shortly after the start of the parade around Boston, the duck boats carrying Red Sox players and their families came to a halt before crossing the finish line of the Boston Marathon on Boylston Street. First, Jonny Gomes and Jarrod Saltalamacchia got off of their boat and placed the World Series trophy on the finish line along with a 617 “Boston Strong” Red Sox jersey.

When Big Papi’s duck boat neared the finish line, the slugger climbed down and broke into a run. Ortiz crossed the finish line of the Boston Marathon flanked by police officers in a symbolic gesture that was met with cheers from the crowd.

Check out the cool moment captured in the photo below.

Patrick Kaleta Placed on Waivers, Sabres GM Says He Must ‘Change His Game’ to Stay in NHL 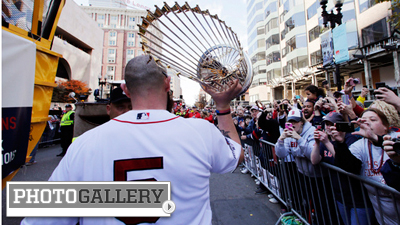