Defensive Breakdowns Too Frequent And Other Impressions From Celtics' Loss to Trail Blazers - NESN.com Skip to content BOSTON — The number sounded wrong to Jared Sullinger, like the questioner must have made it up. There was no way the Celtics gave up 67 points combined in the second and third quarters to the Trail Blazers on Friday.

“Sixty-seven?” Sullinger said incredulously. “I don’t know. They made a lot of great shots. Wesley Matthews in the corner with Avery [Bradley] guarding him — there were multiple shots they made that were very tough. They were just hot, and I don’t think we took it the extra step to break their rhythm and they stayed in rhythm all night.”

This game was not going to be a cakewalk for the Celtics, no matter what. A season after fielding an absolutely embarrassing bench, Portland rode backup point guard Mo Williams whenever LaMarcus Aldridge, Damian Lillard or Nicolas Batum got tired of taking it to the Celtics. Batum, in particular, found his stroke after a shaky start for the surprising Blazers. He missed his first five shots, then made six of his last 10 en route to 18 points.

“We just relaxed on Batum and now you’ve got Batum going,” Celtics coach Brad Stevens said. “And that’s not a good thing. … It sure felt like more than 18 because he hit some big ones that really separated the game.”

The Celtics fell behind by eight points in the first quarter, then pulled ahead by eight in the second quarter on the strength of their second unit of Sullinger, Gerald Wallace, Courtney Lee, Phil Pressey and Vitor Faverani. But once the Celtics’ defensive well dried up, they lost the ability to run and their halfcourt offense grew stagnant.

In the third quarter, the Celtics probably got a little too committed to getting the ball to Sullinger. The second-year forward was on his way to a career night, but focusing on feeding the big man forced the Celtics to play slowly and nullified their speed advantage against the brick-tough Blazers.

If the Celtics are to post a respectable record this season — as always, this includes the disclaimer that a lot of people don’t want that to be the case — then they need to protect their home court. Even bad teams typically post winning records at home. The last-place Raptors were 21-20 at Air Canada Centre last season, when no team in the Atlantic Division posted a losing record on its own home floor.

The parquet has not been as kind to the Celtics so far this season, though. Friday’s loss dropped the Celtics to 2-3 at home, a record that is identical to their road mark. During the previous regime, the Celtics were virtually unbeatable at home. Last season, they were 14 games over .500 at TD Garden, and that was a down year.

Every season has peaks and valleys. The Celtics just seem to have experienced their fair share in the first three weeks of the season.

After losing their first four games, the Celtics put together a four-game winning streak, and now they have lost two straight heading into a three-game road trip through the Western Conference. Those are big swings. For Stevens, who seldom lost consecutive games at Butler, it must be unbearable.

Not so, Stevens said.

“It’s more topsy-turvy for everybody else than it is for me,” Stevens said. “You know, I hate losing. I don’t stomach it well. I don’t deal with it well. But I’ll be back at work [Friday] night.”

Courtney Lee had a straightforward solution to the valley the Celtics currently are in.

“What we’re going to do is go ahead and win two more,” Lee said.

Well, then. That should work. 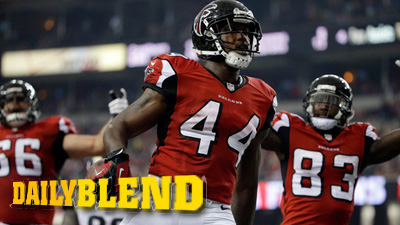 Report: Falcons Running Back Jason Snelling May Have Tried to Eat Marijuana Before Arrest