Bad calls are part of today?s NFL. With instant replay providing ample salt for every wound, it?s guaranteed that the refs are going to get some calls right and many wrong in any given game, and that fans will know it.

Sunday?s 49ers-Saints game had a few big ones. There were two decisions made concerning intentional grounding, with New Orleans? Drew Brees being called for it and San Francisco?s Colin Kaepernick not (both calls were correct, but Kaepernick?s gets a giant eye roll, and the official?s explanation (?well outside the pocket?) gets a distinctive F).

The biggest call of the game, however, came when Ahmad Brooks stormed Brees and rubber-chicken-necked the Saints quarterback. It was a ghastly blow, especially when seen in slow motion, and Brooks was quickly called for roughing the passer, as it was deemed he hit Brees in the neck area.

By the book, it was the right call. If Brooks hit Brees in the neck, that?s a penalty.

But a call being right doesn?t mean it?s not unfortunate, and in two ways, Brooks? hit on Brees was quite unfortunate for Brooks and the many other defensive players in the NFL who are going to have to get used to such calls being made again and again.

First, the penalty stinks because Brooks is 6-foot-3 and 259 pounds, and Brees is 6-foot (if that) and 209 pounds. On every other play, the future Hall of Fame quarterback has to rise on his toes and bug out his eyes, trying to see around the giants on the field. He?s had to endure struggles other NFL signal callers never have, from finding windows for his throws to his smaller frame absorbing hits much harder.

But on Sunday, Brees? size worked to his advantage. As replays showed, a standing-up Brooks, due to his size, doesn?t have much of a chance of not hitting the shorter Brees in the head or the neck — both no-nos when it comes to quarterbacks. Brooks tackled Brees across the body, with his arms stretched straight out, but what may have been another player?s chest was instead Brees? neck. That?s where Brooks is just dealing with bad luck. Brooks likely could not have pulled off the same great move to get to the quarterback if he had adjusted and tried to hit lower — it would have just been unnatural. His excellent play was undone by a player being smaller, and that?s exactly why Brooks? pointed profane postgame comments make some sense.

But the larger reason the penalty call against Brooks stinks is for the other half of what Brooks had to say Sunday (he called modern football “watered down”), and for the reason that defensive players have been bemoaning every new rule made to protect quarterbacks: There?s not much defensive players can do anymore to make good plays without fear of a flag. Many moves that used to be legal are now penalty-worthy, and even the legitimate ones are just one bit of bad timing — or a few inches of a shorter quarterback — away from a player getting accidentally called for a huge penalty when he should have a clean sack.

It?s obvious why the league has to have such rules. The NFL doesn?t want to weather any more seasons — or even games — without quarterbacks of the caliber of Peyton Manning, Tom Brady or Aaron Rodgers. There?s a good half-dozen teams in the NFL that are basically unwatchable right now due to their rot at quarterback, and preventing the loss of the best players in the league on fluke plays, twisted knees or bad concussions is worth every extra yellow flag.

The modern NFL is built to protect its passing, its offense and its quarterbacks, and the defensive players are the ones who have to swallow that. They?re understandably upset.

But the penalty on Brooks was the right call beyond being correct by the book, if not because Brees wiped off the blood and stood up to play again this time, then because he?ll perhaps be prevented from going down that way again. As much as people love good defense and a solid hit, no one likes what the Colts looked like the year after losing Manning, the Patriots the year without Brady or the Packers right now without Rodgers. No one will like the Saints without Brees. That?s the direction the NFL has chosen.

Brooks has a point. But he?s going to have to learn to hit lower — or perhaps get shorter — as long as he plays in a league that bases its success on preserving Brady Rules and rubbernecked chickens. 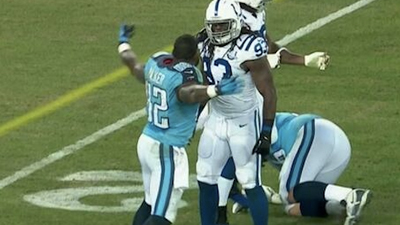