Frank Vogel Mistaken for Brad Stevens More Than Once During Pacers' Visit to Boston, Says It's 'Not Uncommon' - NESN.com Skip to content Boston Celtics fans are just getting to know Brad Stevens, but it seems some could stand to do a Google image search of the new head coach.

The Indiana Pacers handily beat the Celtics on Friday night, and during his team’s visit, Pacers head coach Frank Vogel stopped in a Boston restaurant to grab some food. It was there that Vogel got some attention — being confused for Stevens.

“Twice,” Vogel said in a postgame interview. “My server first. Then on the way out, another gentleman came up and said, ‘Are you the new coach?’ I said, ‘Well, I’ve been there like three years.’ ‘But the Celtics just got a new coach.’ ‘Yeah, but I’m not the Celtics’ coach.’

“That’s not uncommon. It’s uncommon for it to happen here. It usually happens in Indianapolis.”

While the two coaches may share a similar look, their two teams are headed on divergent paths this season. The Pacers are 11-1 after the win, and the rebuilding Celtics are 4-10. Though Stevens may not exactly be in an enviable position coaching-wise, Vogel admitted be probably could have benefited from pretending to be the young coach while in Boston.

When asked if his meal was comped by the mixed-up server, Vogel replied with, “No. If I said I was Brad Stevens I probably would’ve. I wasn’t very smart with my answer I guess.”

Didn’t see that one coming. 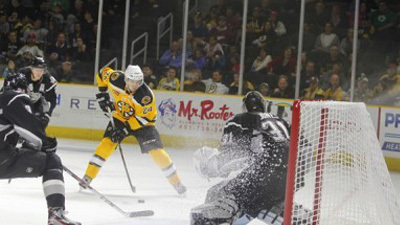