LOS ANGELES — Jaromir Jagr‘s second clutch goal in two nights gave the New Jersey Devils a fortunate win after they were held to 15 shots by the Los Angeles Kings.

Jagr tied Gordie Howe‘s NHL record of 121 game-winning goals by scoring 2:30 into overtime, and Cory Schneider made 34 saves to lead the Devils over the Kings 2-1 on Thursday.

“We were outplayed and outshot. We shouldn’t have been in the game,” Jagr said. “But Cory was excellent and he kept us in the game — especially in the first period. We should probably have lost 5-0.”

Jagr extended his league record for overtime goals to 18. It was his 690th overall, pulling the 41-year-old into a tie for ninth overall with former Penguins teammate Mario Lemieux.

The Devils won in overtime for the second straight night and are 9-4-2 following an 0-4-3 start. They beat Anaheim 4-3 on Wednesday after Jagr scored the tying goal with 61 seconds left in regulation.

The Devils made their first visit to Staples Center since June 11, 2012, the night the Kings beat them 6-1 to win the Stanley Cup. Last Friday, the Kings won 2-0 in New Jersey.

Jagr received a holding penalty 17 seconds into overtime, but Kings captain Dustin Brown also was sent off for diving on the play — leaving the teams to skate 3-on-3.

“With all respect to Brown, I am not that strong, so I think he acted a little bit,” Jagr said. “I grabbed him and held him, but I am not the Terminator.”

Just 13 seconds after the penalties expired, Jagr got a cross-ice pass in the low slot from Marek Zidlicky and tucked his ninth goal of the season past Ben Scrivens.

“I don’t know too many other players that would have had the patience to hold it and hold it that extra second. You can’t teach that. That’s why he’s a Hall of Fame player,” Devils coach Peter DeBoer said. “It’s amazing what he is doing at his age, with the minutes we are loading him up with and the responsibilities we are asking of him. He played against [Anze] Kopitar‘s line all night. He’s been incredible.”

The Kings were outshooting the Devils 29-6 when Ryan Carter put a high backhander past Scrivens’ stick at 5:52 of the third period with defenseman Willie Mitchell screening his goalie. But the Kings pulled even 65 seconds later when Kopitar’s 20-foot wrist shot banked off Schneider’s left arm and Justin Williams tapped in the loose puck.

“I thought Ryan’s goal would be enough,” said Schneider, who stopped a breakaway by Trevor Lewis with less than two minutes left in the first period. “Unfortunately we gave it right back about a minute later, but we stuck with it. We didn’t get down on ourselves.”

“I’m happy with the effort, but not the result,” Scrivens said. “We generated our fair share of chances, but we ran into a hot goalie. Schneider played a great one tonight.”

Lewis, still looking for his first goal of the season, stole the puck from Michael Ryder at the Kings’ blue line and beat him all the way down the ice before Schneider made the save on his knees with 1:53 left in the first.

“We definitely got lots of shots and opportunities, but we didn’t bear down on them,” Kopitar said. “That was the key to their success.”

The Kings were 0-for-4 on the power play against the league’s least-penalized team. The Devils were 0-for-2 with the man advantage. 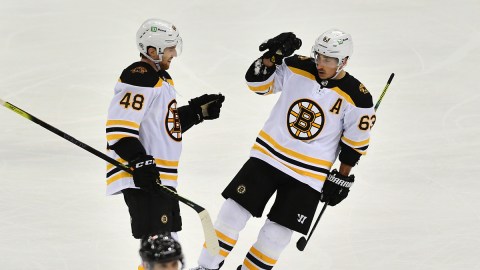