Jesse Winchester will likely receive a call from Brendan Shanahan and the NHL’s Department of Player Safety over the next 24 hours for his nasty elbow to the head of Bruins center Chris Kelly during the first period of Thursday’s game.

The Panthers forward not only delivered a vicious elbow with Kelly’s head being the principal point of contact, it also appeared that his skates left the ice as he went to make the hit.

Somehow, both referees missed the play, and no penalty was called on Winchester. Gregory Campbell immediately stuck up for his teammate and fought Winchester.

Check out the elbow that could result in Winchester getting a suspension in GIF form below, with a stick tap to @BruinsHockeyNow. 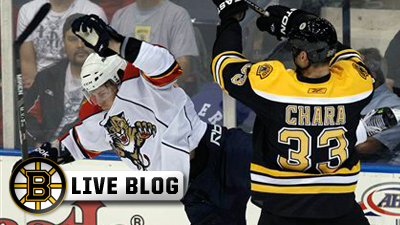