“Boston Strong” is really only a saying, but it gets its power from moments like this.

Right in the middle of the Red Sox championship parade on Saturday, as the route wound its way to the Boston Marathon finish line on Boylston Street, Jonny Gomes and Jarrod Saltalamacchia exited their duck boats. Gomes laid the trophy on the yellow and blue finish line as he and Salty held up 617 “Boston Strong” Red Sox jerseys.

Then, much like in the Bruins and Red Sox games just following the Marathon bombings, the crowd began signing along to a rendition of “God Bless America.” The day of confetti, music and “rejubilation” was paused for this reflective moment.

The very fact that these Red Sox players, bearded and brazen, are trusted to honor the victims of the Marathon bombings is a perfect example of how accepted they are by the city of Boston. Starting their season with the rubble from 2012 all around them, players like Mike Napoli and Dustin Pedroia crafted this year’s team into not only an incredibly talented, but impossibly likable group of players that embraced the city of Boston that so enthusiastically embraced them.

This Red Sox team and this town have never forgotten about the victims of the Boston Marathon bombings and for that reason, the celebration continues.

Check out video of the finish line ceremony above. 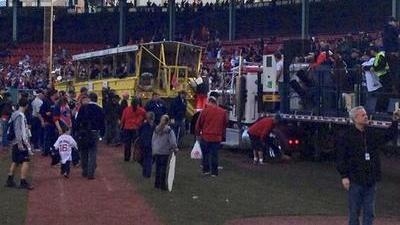