Kari Lehtonen made the impossible possible on Friday night.

The Stars goaltender made one of the most impressive and miraculous saves of the year, stopping an Avalanche goal that he had no business stopping during the third period. With Dallas down 2-1, a shot toward the netminder resulted in a scramble for the puck that Lehtonen couldn’t snag.

Colorado’s John Mitchell ended up winning the battle, skating behind the Dallas goal, looking to be in a good position to increase their lead to two goals. Prior to Mitchell coming away with the puck, though, Lehtonen had lost his stick in all the commotion.

Scrambling to get back in position, the Stars netminder somehow kept his team in the game, quickly turning himself around and reaching up with his arm to block the shot. Lehtonen ultimately kept the puck out of the back of the net with a pad save that ricocheted off the post and safely underneath his body — never crossing the goal line.

Check out the unbelievable save below. 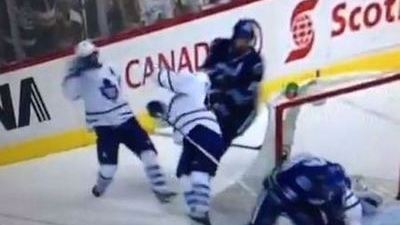