Mike Krzyzewski Tells John Farrell He Would Pick Dustin Pedroia for His Team Every Day, Calls Him ‘Stone-Cold Killer’ - NESN.com Skip to content The winningest coach in college basketball had an interview with Red Sox manager John Farrell on SiriusXM College Sports Nation, and he quickly made clear who his favorite Sox player is. (He also, in Patriots-like fashion, shared his surprise at the size of the player known as the heart of the Red Sox.)

?As a basketball coach, and I?m a big baseball fan, if I could pick one guy to have on my team every day, it would be Pedroia,? Krzyzewski told Farrell, according to The Boston Globe. ?Every time I watch you guys play, there?s no monkey business going on. That guy is a stone-cold killer. He sets an amazing tone. How big is his bat? His bat looks bigger than him!?

?Well, because he?s only 5-[foot]-6, a 33-inch bat is going to look half his body [size],? Farrell responded with a laugh. ?? He?s got incredible hand-eye coordination. If you slow down video and watch, every ounce of his 165 pounds is into every single swing, and when you consider the aggressiveness to the swing and his ability to make contact so frequently, he?s a rarity, there?s no doubt about it. But the thing that is bigger than his bat is his heart. It is amazing. And he talks a big game because he doesn?t back down from anyone. We?re just so fortunate to be able to watch this guy on a daily basis.”

Krzyzewski and Farrell also talked about the Red Sox going from a team that finished last in the American League East in 2012 to winning the World Series this season. Farrell credited general manager Ben Cherington for starting to ?put his vision down? in the August 2012 trade and bringing in players with ?similar values and views on how the game should be played.?

Farrell was also frank about the Red Sox? fortunes in the postseason, complimenting David Ortiz on his role in the pivotal second game of the American League Championship Series, when the Red Sox trailed by four runs before Ortiz changed the fortune of that game, the series and the playoffs with one perfect swing.

?The one thing I can say with a lot of confidence is if Ortiz doesn?t hit the grand slam, you?re probably talking to another manager right now,? Farrell said.

Krzyzewski has always been the type to credit his players after big wins, and it appears he?s found a kindred spirit in Boston?s manager. 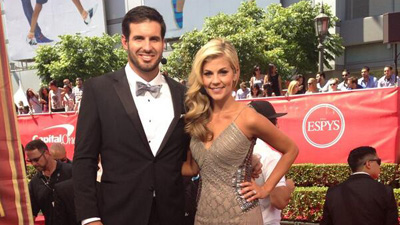