If you spent the last seven months hiding in a cave somewhere, you missed quite the ride.

The Red Sox are World Series champions, and their return to glory involved one of the most memorable seasons in franchise history. This year truly tested Boston’s resilience, and the Red Sox — like the city — stood tall.

It became clear back in spring training that this season was going to be different. John Farrell was at the helm, a number of high-character players joined the mix and the holdovers from last season’s 69-93 debacle arrived in Fort Myers with a chip on their shoulder.

“As soon as we went to Fort Myers, the movie’s already been written,” outfielder Jonny Gomes told the Fenway Park crowd immediately following the Red Sox’ World Series-clinching victory. “All we had to do was press play, and this is what happened.”

Perhaps that’s true. Perhaps the Red Sox were a team of destiny. Whatever the case, 2013 was a wild ride from beginning to end. Even in the wake of an inexplicable tragedy, Boston stayed strong and supported what would eventually become a championship team.

Now, with the Red Sox having secured their third title in 10 years, we can take a step back and truly appreciate one of the most intriguing seasons in sports history. There were way more than 10 amazing moments in 2013, but check out the link below to see the best of the best. 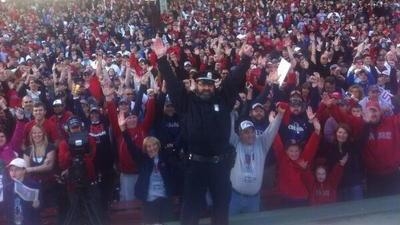