If you’ve never heard of Asuka Iinuma Brown, you’re probably not alone. After the American League Manager of the Year balloting came out Tuesday night, however, you might start to hear a lot more about her.

The Seattle-based writer, who writes for Jiji Press, a Japanese wire news service, had quite the controversial manager of the year ballot. While Cleveland’s Terry Francona edged Boston’s John Farrell in the final vote, Brown decided to leave both skippers off of her ballot.

Members of the Baseball Writers Association of America are asked to pick their top three choices for the award, picking first, second and third place. Instead of putting Farrell or Francona on the ballot, Brown’s ballot had Oakland’s Bob Melvin finishing first, Tampa Bay’s Joe Maddon in second, and for some reason, Baltimore’s Buck Showalter in third place.

The San Francisco Chronicle’s Scott Ostler was the only other writer to give Melvin a first-place vote, and Brown’s third-place vote for Showalter was the only the Orioles manager received.

Somebody’s got some explaining to do.

ESPN.com’s Christina Kahrl also left Farrell off of her ballot. She voted for Francona to win, followed by Melvin and Maddon. It sounds as if Kahrl is counting the Red Sox’ salary against Farrell. In fairness, here’s her defense of her ballot.

See all of the voting by clicking here. 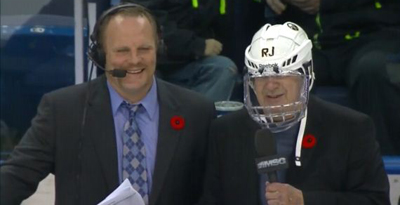 Sabres Play-By-Play Announcer Calls Game From In Between Benches, Nearly Gets Taken Out By Kings Player (Video)