COSTA DO SAUIPE, Brazil — Thirty-two teams, a world of possibilities.

The 31 countries that qualified for the 2014 World Cup and host nation Brazil will be hoping for the luck of the draw Friday. That’s when their names are plucked from bowls in a globally televised extravaganza to determine where, when and, most important, who they will play in Brazil next June at soccer’s showcase tournament.

Will Brazil be paired in a tough opening group that could sink its bid for a sixth World Cup victory, souring the tournament that is costing the nation nearly $11 billion?

Who will triumph if four-time world player of the year Lionel Messi of Argentina is drawn against Cristiano Ronaldo of Portugal, his nemesis in soccer’s most intense individual rivalry.

Could defending champion Spain be drawn to play its opening game against the Netherlands? That repeat of the ill-tempered 2010 final would also cause sharp intakes of breath.

With the world title at stake and because of soccer’s deep sporting, historical and political rivalries, the transparent bowls holding the teams’ names are bound to produce alluring matchups.

Around the world, eyes will be trained on 1998 World Cup winner Zinedine Zidane and other former stars from the eight nations that have won the trophy as they select balls containing slips of paper bearing the teams’ names.

The 90-minute ceremony will be televised live to more than 190 countries. Even in the 177 soccer-playing nations and territories that didn’t qualify for the monthlong tournament, fans will be hoping for encounters worthy of this showpiece.

Bosnia-Herzegovina will get its first taste of the nervous excitement of a World Cup draw, having qualified as an independent nation two decades after its war that killed more than 100,000 people. Other nations are old hands: Seven have qualified for each of the last seven World Cups — Argentina, Brazil, Germany, Italy, South Korea, Spain and the United States.

Although it likes to consider itself the fun-loving soul of soccer, Brazil will field a team next year that so far is yet to wow with its play as did some of its great squads of the past, with such jewels as Pele. Brazilian fans, like those from all the strongest nations, will pray their team isn’t drawn in the toughest group, which is sure to be dubbed the “Group of Death,” a label of questionable taste that soccer is fond of.

Brazil will be using the tournament as a window to the world. Keen to show it has more to offer than sandy beaches, samba and soccer, the world’s seventh-largest economy has built and renovated 12 stadiums and poured billions more into other public works.

Such expenditure in a country with millions living in third-world poverty has sparked vigorous debate about the value of mega sports events, especially with Olympic host Rio de Janeiro also spending heavily to prepare for the 2016 Summer Games. Protesters who poured into Brazil’s streets during the Confederations Cup warmup tournament in June listed World Cup spending among their grievances.

Some 1,300 guests and 2,000 journalists were converging on the Brazilian Atlantic beach resort of Costa do Sauipe for the draw. Aside from Uruguay’s Oscar Tabarez and Miguel Herrera of Mexico, all the team coaches were expected, anxious to learn not only their opponents but where in the world’s fifth-largest country they will play.

Depending on how they are drawn, some teams will travel considerably further than others in the country that is more than 2,500 miles from tip to toe and across. Some will have to play in the heat and humidity of the Amazon basin, with Manaus in the heart of the jungle considered perhaps the most potentially physically taxing venue for players, especially those from more moderate climes. None of the previous seven World Cups held in the Americas, starting with the first edition in Uruguay in 1930, was won by a European team.

FIFA executives agreed Thursday that all 32 teams will get at least $8 million in prize money, with $35 million for the champion.

The draw itself is fairly straightforward. It should take about 35 minutes to divide the 32 teams into eight four-team groups, labeled A to H. The basic principle of pulling names from hats has been used by the governing body for decades, although the draw has become increasingly showbiz since it was first televised in 1966.

FIFA and Brazilian authorities say they spent about $11 million organizing this draw. That included erecting a tent the size of an aircraft hangar for the draw, with about 30 miles of cable, 36 tons of lighting and 9,000 square meters of floor space ? making it larger than nearly all of the world’s cathedrals.

Husband and wife team Fernanda Lima and Rodrigo Hilbert, both presenters on Brazilian television, will emcee the show. Samba singer Alcione, Sao Paulo rapper Emicida and others are providing the entertainment. 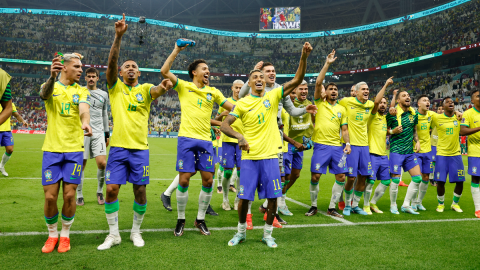