Bruins forward Brad Marchand knows how to get under the opposition’s skin, no matter how the game is going.

Marchand was at it again Saturday night in Vancouver where the Bruins faced off against the Canucks for just the second time since the 2011 Stanley Cup Final. The Boston forward brought his best agitation game, and he showed that off in the second period.

The pesky winger skated back toward his bench, and as he did, he started to get into it with someone in a blue sweater. Marchand then took off his glove and kissed his ring finger in a not-so-subtle reminder that the Bruins won that 2011 Cup Final.

Check it out in the Vine video below via Twitter user Sinochick. 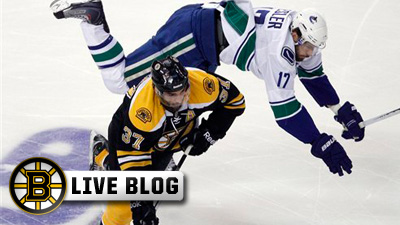 Alex Rodriguez ‘Confident’ He Will Play Next Season, Says He’s Working Hard to Get Back in Yankees Lineup