Carmelo Anthony had a team-high 19 points, nabbed more rebounds than any other player in those hideous orange Knicks uniforms and earned more free throw attempts than anybody on the Celtics. Yet in his individual matchup against Brandon Bass, there was no question who won the battle, definitively.

The Knicks had no answers in a dominating 114-73 Celtics victory on Sunday, and a big part of that started with Bass’ work against one of the game’s great volume scorers. Using his superior strength and underrated athleticism, Bass bullied Anthony at both ends of the court for a performance that was far more impressive than his 16 points and eight rebounds suggested.

Anthony started at power forward as Knicks coach Mike Woodson went small, which played right into the Celtics’ hands. Jared Sullinger and Bass seldom face a front line they can just push around, so their eyes must have gotten wide when they saw Anthony and pillow-soft center Andrea Bargnani lining up across from them at tip-off. The Celtics went inside from the get-go, also posting Jeff Green against Tim Hardaway Jr. when possible, and bulled their way to a 25-point lead in the first quarter.

The lead eventually grew to 43 points with Bass following and hassling Anthony all over the court. In a game-high 32 minutes, Bass picked right up where he left off last spring, when he harassed Anthony throughout the Celtics’ six-game playoff loss to the Knicks. Anthony may have reached 19 points, but because of Bass, he shot just 5-for-15 and had just one assist.

The normally mild-mannered power forward even flashed some emotion when he threw down a putback dunk after drawing a lot of contact. The outburst drew a technical foul, but when the trade-off for the Celtics is an active and aggressive 6-foot-8, 240-pound human helping them control the paint — where Boston outscored New York, 42-22 — the Celtics will take it.

With Avery Bradley notching his first career double-double with 13 points and 10 rebounds, it was almost possible to forget about another strong performance by Jordan Crawford. The “point guard” designation became much more than just a label for Crawford long ago, but he has gradually mixed in his old shot-happy ways. Crawford set a personal high with six 3-pointers on Sunday and led all scorers with 12 points in the third quarter.

In the last two third quarters, both of which came in Boston wins, Crawford has totaled 20 points.

“We played really well, and they didn’t play as well as they’ve been playing,” Stevens told reporters in New York. “Sometimes, as I’ve already learned in this league, you can be on the good end or the bad end of that. We were lucky [Sunday] to be on the good end. 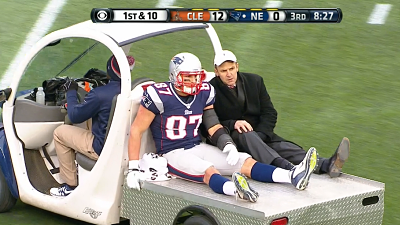 Report: Rob Gronkowski’s Knee Injury Is ‘Not Looking Good,’ Will Have MRI on Monday