LeGarrette Blount Says He Meant No Disrespect to Ray Lewis With Dance, Linebacker Told Him to 'Kill That Thang' - NESN.com Skip to content

Some may have viewed LeGarrette Blount‘s touchdown dance during the fourth quarter of Sunday’s rout of the Ravens as a taunt aimed at former Baltimore linebacker Ray Lewis. But as Blount tells it, the celebration was more of an homage to the future Hall of Famer.

The Patriots running back tweeted after the game that he meant no disrespect to Lewis, and that he got the backer’s blessing before busting out his signature moves.

Blount carried the load for the Patriots after Shane Vereen went down with an injury, rushing for 76 yards and two scores in the 41-7 win. The Patriots had already clinched the AFC East earlier in the day by virtue of Miami’s loss to Buffalo, and they can clinch a first-round bye with a win over the Bills in next Sunday’s regular-season finale. 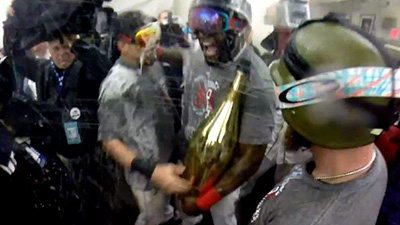