Max Pacioretty Says He ‘Felt Terrible’ About Hit That Hurt Johnny Boychuk, Who May Have Back Injury - NESN.com Skip to content The hit that sent Johnny Boychuk to the ice and then the hospital on Thursday night may not have been dirty, but it was still scary.

While Boychuk has recovered to the point that he traveled back to Boston with the Bruins and will be further examined there, Bruins coach Claude Julien and the Canadiens? Max Pacioretty, who laid the hit that downed Boychuk, were still trying to piece together what happened afterward.

“I have no comment on it, I honestly, I couldn’t even walk you through the hit. It’s, you know, I felt terrible, I didn’t even really know what happened,” Pacioretty said, according to ESPN. “I was just kind of battling for the puck. I felt terrible after it happened. I’m going to have to see it because I haven’t even seen the replay.”

Julien said the Bruins didn?t think the hit was dirty. Pacioretty received a boarding penalty, and Julien wasn?t calling for anything more.

“It was deserving of a two-minute penalty,” Julien said. “I looked at it and it was, and I’m being honest, I don’t think it was more than that. I think it’s probably the way he went into the boards that did most of the damage. I don’t think it was the severity of the hit. We have to be honest if we’re going to clean up this game, and to turn around and say it should’ve been a game suspension, I don’t think so.”

Pacioretty also said the Bruins did not seem to have a problem with the hit, and he shed some light on exactly what the injury may have been in describing what was recounted to him after the play.

“I asked people, because I literally didn’t know what happened,” he said. “They said, I think he twisted his back or something in regards to that. I obviously feel terrible, I’ve been in that situation before, and I had no intent to injury anybody. I thought I was just playing hard. I hope everything’s going to be all right for him.

“You know what, I think the team gave me the benefit of the doubt, the few guys I talked to about it. I, honest to God, didn’t have any intentions of doing anything like that. Like I said, I hope he gets better quick.”

Julien would not comment on whether Boychuk hurt his back, saying he didn?t want to give incorrect information. 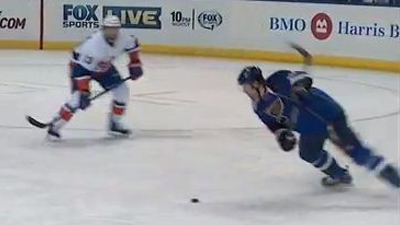