Shane Vereen Is Key to Patriots' Offense Without Rob Gronkowski, Robert Griffin III Should Sit and Other Thoughts - NESN.com Skip to content Another week brought a few more quick deaths to some potential playoff contenders around the league, and the postseason picture is finally starting to take shape.

The Titans, Steelers and Giants all but put forks in their playoff hopes, while the Chargers, Jets and Ravens were all able to keep their chances alive with some gutty performances. The AFC is starting to whittle out some of the pretenders, as the final playoff spot looks set for the Chargers, Dolphins, Ravens and Jets. Meanwhile, the NFC race is still wide open with 10 teams still alive, including three divisions (NFC East, North and South) still very much up for grabs.

The wintry mix unexpectedly made for an exciting week of football, and Week 15 looks like it could bring even more snow — and fun? — to the mix. The Thursday (Chargers-Broncos) and Monday (Ravens-Lions) night games should make for tons of fun with not too much else in between, but that doesn’t mean there won’t be plenty of excitement.

Before the weekend of fun gets underway, though, let’s take dive into some leftover thoughts from the week that was.

1. Patriots must rely on Vereen — The Patriots were able to find success in six weeks without Rob Gronkowski, so it shouldn’t be that much of an adjustment to life without the All-Pro tight end. Not to say it will be easy, but Josh McDaniels and Tom Brady do have the weapons in place to make up for Gronkowski’s absence. While Julian Edelman, who has been something of a revelation this season, and Danny Amendola will certainly help, Shane Vereen might be the most important piece to that puzzle.

After Gronkowki went down with a torn ACL in the third quarter on Sunday, Brady relied heavily on Vereen both as a runner out of the backfield and in the passing game. In fact, nine of Vereen’s 12 catches on Sunday came after Gronkowski’s injury in the second half. Vereen, who measures in at 5-foot-10 and 200 pounds, isn’t quite the physical specimen that the 6-foot-6, 265-pound Gronkowski has proven to be, but he is yet another almost impossible assignment for opposing defenses. His speed and versatility make him a perfect option to help replace Gronkowski’s impact and production in the offense.

2. RG3 should sit — The debate in D.C. may be a heated one right now, as Robert Griffin III will be benched for the final three weeks of the season, but it really shouldn’t be a debate at all. Washington is just 3-10 on the year and already out of the playoff picture. Griffin hasn’t exactly been the epitome of efficiency over the first 13 games this season, and his health still seems to be a factor when watching him each week. By shutting him down now, Mike Shanahan is allowing the Redskins’ best asset to properly heal up and enter a full offseason well-rested and energized. And to make the decision even more appealing, showing off Kirk Cousins over the final few weeks could only be beneficial, as it could make him an even more appealing trade target for a quarterback-needy team this offseason.

3. Learn the name — Charles Clay has been around for a few years, but he’s only now making his way onto the main stage of the NFL. The bulky tight end has become a major part of the Dolphins’ offense in recent weeks and almost singlehandedly won the game against the Steelers on Sunday. Clay has already set new career highs with 60 catches, 678 yards and six touchdowns this season, but Ryan Tannehill’s reliance on him over the past few weeks just goes to prove his overall value to the offense. Tannehill has targeted Clay on more than 22 percent of his throws over the last five games, including nearly 28 percent of targets over the last two. Not only has he been targeted a lot, but he’s hauling in 65 percent of those targets (28 of 43) in that span. So, if the Dolphins expect to make the playoffs this year, they’ll need to ride Clay, especially down in the red zone where he had two touchdowns on Sunday.

4. Snow = Offense — While Alshon Jeffery pulled in one of the catches of the year at the end of the first half on Monday night, he probably didn’t know that he had just pulled in the 100th touchdown of the week in the NFL. That number didn’t mean much for long, as the Bears and Cowboys combined for four more before Week 14 was officially over, but it was pretty cool to see so much offense this weekend.

The NFL has become very much an offensive game, with points steadily on the rise over the last decade. Yet, even in one of the worst weather weekends that the NFL has ever seen, teams were still able to put up 104 total touchdowns, including an NFL-record 90 on Sunday alone. Defense may still win championships, but offense is still what keeps people coming back.

5. Returns are still important — When the NFL decided to move kickoffs up to the 35-yard line a few years ago, the thought was that it was slowly eliminating special teams from the game. That notion is largely overblown, even if touchdown returns are down by nearly 17 percent per game this season (31 total in 2012 to only 19 so far this season).

Returns made up a chunk of the 104 touchdowns accounted for over the weekend, with two teams (Chiefs and Lions) returning both kick and punt returns for touchdowns — first time since 1940. While the Lions weren’t able to pull out the win, even with the two special teams’ scores, the Chiefs’ blowout win was sparked by their two scores and Jacoby Jones‘ kickoff return late in the fourth quarter against the Vikings helped propel the Ravens to a much-needed win. So, don’t rule out the power of the return, because it’s still playing an important role.

6. Cam or Scam? — While at Auburn, Cam Newton was often given the label “scam” by other teams’ fanbases. Since entering the NFL, he’s done well to shed that nickname. However, he may be earning that nickname back in a different context this time.

The Panthers haven’t exactly been worldbeaters during Newton’s first three seasons in the league, but he hasn’t done much to prove that he’s a clutch player during that stretch either. Newton is just 5-15 against teams with winning records during his three seasons. He is making progress against some of the league’s better teams, going 2-2 against winning teams this season, including wins over the 49ers and Patriots in back-to-back weeks, but winning a division tilt against the Saints, who slaughtered Carolina 31-13 on Sunday, in Week 16 would be a major step in the right direction.

7. Cowboys won’t make playoffs without D — The Cowboys’ defense is full of highly drafted and big-money players, yet they somehow are still worst in the NFL this season. Dallas is allowing a league-worst 426 yards per game and 298 passing yards per game this season. Brandon Carr isn’t exactly living up to his $50 million contract nor is 2012 first-round pick Morris Claiborne. The Cowboys’ pass rush hasn’t exactly lived up to expectations either, managing just 27 sacks on the year (tied for 27th in the NFL).

Dallas might have been at their very worst on Monday night, though, allowing the Bears to score on all eight of their drives on Monday and not forcing an opposing offense to punt for the second time this season — just the second time any team has done it twice in a season since 1940. Tony Romo, DeMarco Murray and the offense have done their job and then some this season, but, with such an abysmal defense, they will be hard pressed to make the playoffs even in the NFC Least.

8. Lions have a turnover problem — After a 6-3 start to the season, the Lions have lost three of their last four games. And the discrepancy between the two stretches seems to be pretty obvious: turnovers. During the Lions’ first nine games, they turned the ball over just 13 times. Over the last four, though, they’ve committed 15 turnovers and are operating at a minus-11 during the stretch. Matthew Stafford has been a big liability over the four games, too, throwing seven of his 14 interceptions on the season. If the Lions expect to lock down the division and make a deep playoff run, then they’ll need to stop giving the ball away.

9. Kaepernick still isn’t right — Michael Crabtree is back in the fold in San Francisco, but Colin Kaepernick still doesn’t seem to be himself. Kaepernick has completed just 59 percent of his passes over the two games with Crabtree and has still thrown his 16 touchdowns to just two receivers on the season (Vernon Davis and Anquan Boldin). Kaepernick has the ability to be more effective as a passer, as he proved throughout much of last season, but he’ll need to start spreading the ball around a bit more and feeling more comfortable stepping up in the pocket before that can happen.

10. Arizona looks legit — Carson Palmer doesn’t exactly strike fear in the eyes of defenders typically, but maybe he should. After a dismal first half of the season, which included 14 interceptions and just 10 touchdowns, Palmer has turned over a new leaf over the last five weeks, completing 69 percent of his passes and hitting on 10 touchdowns to just three picks. The Cardinals have averaged 29 points during that stretch (20 points per game in eight games prior), which has seen them climb from a 4-4 record to 8-5 and in the thick of the playoff race. Whether Palmer is capable of remaining this efficient come playoff time is a big question, but, with weapons like Larry Fitzgerald and Michael Floyd and a staunch defense, the Cardinals are certainly capable of making a deep playoff run. 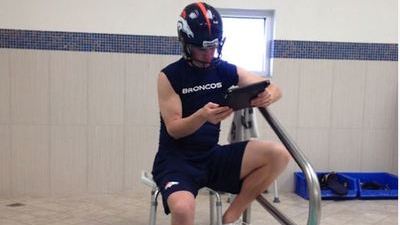