BOSTON — The plan to have Rajon Rondo spend some time in the D-League amounted to just a couple of hours and a practice, but it could turn out to be just the first step in a major shift in the way the Boston Celtics utilize their NBA Development League affiliate.

Rookie center Vitor Faverani served a one-night stint with the Maine Red Claws on Saturday, playing a game in Portland, Maine, before re-joining the big club in time for a matchup with the Brooklyn Nets the next day. It’s an approach Celtics coach Brad Stevens may repeat the rest of the season to get in-game reps for players who are struggling to crack the NBA rotation.

“In Vitor’s case, we sent him for more game action to Maine,” Stevens said before Wednesday’s game against the Philadelphia 76ers. “We’ll probably do that more with our young guys, all the way through the end of this year.”

The Celtics envisioned this type of relationship when they joined into a “hybrid” relationship with the Red Claws in 2012. Now, a minor-league game is just a two-hour drive away, allowing players to pop up and down from the NBA to the D-League, something that wasn’t possible under the Celtics’ affiliation with the Utah Flash.

Stevens does not appear to be limiting the idea to rookies or fringe rotation players, either. He brought up the D-League option while discussing Jared Sullinger and Kelly Olynyk, young players who appear to be major pieces for the Celtics, both for the present and future.

“Anybody who would be a candidate for that, who wouldn’t be playing as much as we’d like could get a refresher stint in Maine,” Stevens said. “He may need to play.”

Faverani could use the work. The 25-year-old rookie has appeared in 37 of Boston’s 48 games this season, but has averaged only 13 minutes per game. He received his ninth DNP-CD during Wednesday’s 95-94 loss to the Philadelphia 76ers. Yet while he hasn’t had a huge impact on the court, he could end up leaving his imprint on I-95 by being a trendsetter in the way the Celtics do business.

Gerald Wallace: ‘There’s Nowhere To Go But Up’ For Last-Place Celtics 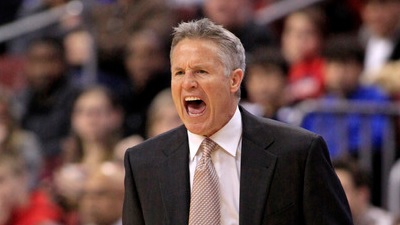