John Elway: 'I Like Everything About Tom Brady'; Patriots QB 'An Absolute Stud' - NESN.com Skip to content Hall of Fame quarterback John Elway, who’s now in charge of the Broncos’ football operations, spoke with the New York Daily News ahead of this weekend’s AFC Championship Game, which will pit Peyton Manning and Denver against Tom Brady‘s New England Patriots.

Elway was complimentary of his own signal-caller, but he also was effusive in his praise for Brady, who would earn his sixth Super Bowl bid with a win Sunday.

?He?s an absolute stud,? Elway said. ?I like his competitive nature. I like everything about Tom Brady — his toughness, the way he?s been able to win in a bunch of different situations up there with [Bill] Belichick. I just got a great deal of respect for Tom.?

As for the game itself, Elway agreed with the general sentiment that a Patriots-Broncos matchup is a win for everyone involved, especially the viewers. New England and Denver were the conference’s two best teams during the regular season, and they already squared off in what was arguably the game of the year back in Week 12, with the Patriots winning 34-31 in overtime.

?I think it?s tremendous. It?s great for the league, great for all the fans in the NFL,? Elway said. ?The fact you get two of the greatest of all time matched up against each other in the AFC Championship Game — to me, it?s what the doctor ordered.? 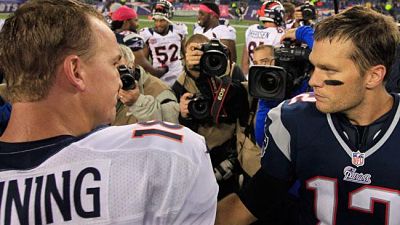