As expected, the Seahawks were a lot more interesting than the Broncos.

It was uncertain whether Marshawn Lynch would participate in the media day craziness. The running back wound up talking to a scrum of reporters for six minutes and 21 seconds before abruptly leaving. Deion Sanders later caught up with Lynch, and he immediately dropped an S-bomb.

Lynch told Deion “I’m about that action, boss” when asked why he doesn’t like talking to the media. He barely talked to Seattle reporters this season.

Lynch won’t be fined for his limited participation in media day. He spoke, and that’s all he needed to do.

Richard Sherman went humble on everyone. He stressed team and might have mentioned all 53 players on the Seahawks’ roster. One of the craziest questions asked Tuesday, about NFL players “making it rain” on strippers, was posed to Sherman. He had a great answer, which you can find below.

Sherman was the star of the show with the biggest scrum around him. Want proof? Check out the cornerback’s tweet below.

A reporter asked Broncos defensive end Shaun Phillips if this is a “must-win game.” Uh, duh.

Among crazy costumes, there was a superhero and someone dressed as Waldo. Hank Azaria and Regis Philbin were among the celebrities in attendance.

Russell Wilson was asked about his hair, since the Seahawks quarterback has grown it long. He said it won’t affect his game, but that he’s growing it out because his hair was long when he won a state championship when he was younger.

It’s amazing that there are still five days until the Super Bowl. This is a long week for the players involved.

1:53 p.m.: Marshawn Lynch will not be fined, according to NFL Network. NFL vice president of communications Brian McCarthy said Lynch participated in media day, and that’s all he needed to do.

A. I’ve never gone to a strip club and thrown money, so I couldn’t tell you. I guess, uh, trying to understand that there are other avenues and other ways you can make money, that women can do anything they want in this world. You can go out there and be a CEO of a company, you can go out there and, like I said, same can be said for kids in the inner city, that the ceiling is limitless, and don’t limit yourself to those possibilities and those circumstances.

Marshawn Lynch is still hiding, though.

1:35 p.m.: Someone just asked Richard Sherman about NFL athletes going into strip clubs and “making it rain,” and how it sets a bad example for women.

1:28 p.m.: NFL Network has focused almost all its attention on Richard Sherman and Marshawn Lynch. I want to see what crazy stuff Michael Bennett is saying.

Sherman said comparisons to Muhammad Ali are humbling. He has said Ali is a role model.

1:20 p.m.: Marshawn Lynch is a fascinating personality. He really didn’t have much to say to Deion Sanders, but it seemed like what he was saying was genuine.

This is now happening.

Marshall Faulk said players should be allowed to decline speaking to the media. Something tells me no one would talk.

I think Marshawn Lynch just dropped an sh-bomb on NFL Network while talking to Prime Time.

Hank Azaria has a pretty sweet blazer on.

1:00 p.m.: Marshawn Lynch talked for six minutes and 21 second and abruptly left media day. He did his obligation.

12:57 p.m.: Russell Wilson says he’s growing out his hair because he and his dad had longer hair when he won a state championship as a kid.

Wilson’s hair is getting pretty long.

Wilson said he had no problem with what Sherman did last Sunday at the NFC Championship Game. He said he didn’t pay attention to the racism aspect of the Sherman reaction.

Wilson also talked about his friendship with Macklemore. He said the two text back and forth.

12:53 p.m.: Richard Sherman said the Seahawks’ defense won’t be throwing in any new wrinkles on Sunday. The defense is what it is.

12:50 p.m.: Sherman says he regrets attacking Crabtree and taking away from the rest of his teammates.

12:46 p.m.: Sherman said having a communications degree has helped him in this process. He’s now praising his teammates. One of the biggest complaints about Sherman’s rant last Sunday was that he took attention away from the Seahawks and brought it toward himself.

12:44 p.m.: The Richard Sherman scrum might be the biggest I’ve ever seen at media day. There’s a big crowd around Russell Wilson, as well, but the Seahawks quarterback will likely say even less than Peyton Manning. Wilson avoids any sort of controversy. He’s been polished since I talked to him at the Senior Bowl two years ago.

12:35 p.m.: There are a lot of people waiting to hear what Richard Sherman has to say. Hopefully it’s something interesting.

12:28 p.m.: The Bruce Springsteen tribute band Tramps Like Us is performing during “halftime” of media day.

12:20 p.m.: Broncos cornerback Dominique Rodgers-Cromartie (who is not planning on retiring) was bothered that Richard Sherman promoted himself as the best cornerback in the NFL.

“Being a defender, that really bothers me,” Rodgers-Cromartie said. “I understand why he did it. He?s been playing well, but I tell myself anytime you got a Champ Bailey, Asante Samuel, a Charles Woodson in the game, you can?t feel you?re the best right now. As good as you are, those guys have been doing it for [years]. I understand why he said that because ?shoot,? that?s how I feel. That?s how you should feel as a defender.”

For what it’s worth, Broncos receiver Demaryius Thomas said Sherman is the best in the game.

12:15 p.m.: Here are the Seahawks players who will be sitting at podiums during media day:

12:02 p.m.: Marshawn Lynch did board the bus with the rest of his teammates to go to media day, according to Ed Werder of ESPN. He will not be answering questions at a podium, despite being one of the biggest stars on the Seahawks.

11:49 a.m.: The Broncos managed to make media day fairly boring. The Seahawks will probably be a different story, however.

The Seahawks are heading into the Prudential Center at 12:45 p.m. Players to watch on the Seahawks are cornerback Richard Sherman, defensive end Michael Bennett and running back Marshawn Lynch, who might not show up.

11:46 a.m.: Where are they going to fit all of these people on Super Bowl Sunday?

11:37 a.m.: Peyton Manning said he would have to say negative things about the NFL and the commissioner for the league to stop airing his mic’d-up line calls on TV. He also said he wouldn’t be willing to pay the fines necessary to do that, though.

TV Azteca is dressed in an interesting way, as usual.

Olympic gymnast Gabby Douglas needs a step stool to give her a few more inches.

There’s a TV crew from Russia at media day.

The Seahawks are on their way to the Prudential Center. The Broncos are done, and they failed to say anything controversial.

11:15 a.m.: Dominique Rodgers-Cromartie says he doesn’t want to retire if the Broncos win the Super Bowl. He also said he wants to be a guidance counselor when he does eventually retire.

Rodgers-Cromartie specified that he was just saying that he’s on a one-year deal and that he’s seen plenty of players never return after signing a similar contract.

11:07 a.m.: Wes Welker said he wouldn’t mind if Richard Sherman lines up across from him in the slot.

11:05 a.m.: Wes Welker was asked by a joke reporter whether he thinks the NFL should abolish the kicker. Welker said that Broncos kicker Matt Prater makes him laugh, so he’d like to keep him around.

10:56 a.m.: Shaun Phillips was asked if this is a “must-win game,” according to the Los Angeles Times’ Sam Farmer.

10:55 a.m.: I’m not quite sure if this means anything, but the Seahawks seem to enjoy the media attention (outside Marshawn Lynch, of course) a whole lot more than the Broncos.

The difference is most obvious when watching Pete Carroll and John Fox. Fox keeps his answers as short and succinct as possible.

Sherman said earlier in the week that Thomas is a top five wide receiver.

10:44 a.m.: John Elway said he’d be very surprised if Peyton Manning retires after the Super Bowl. Elway retired in May 1999 after his second Super Bowl win.

10:41 a.m.: Manning was asked if he’ll appear on Saturday Night Live this week. Don’t think he’ll have time for that one, entertainment reporter.

He also was asked if he watches any of the “Housewives” shows. He said he hasn’t caught them yet.

10:35 a.m.: Manning was asked about his legacy. He said he’d prefer to save those questions until he’s at the end of his career. He said right now he’s “in the home stretch” of his career.

Manning is asked if the thought has crossed his mind of retiring if the Broncos win. He says he’d like to keep playing.

10:33 a.m.: Deion Sanders asked the first question to Peyton Manning. It was: “What makes this Super Bowl different than others?”

Media day has begun. Peyton Manning is walking to the podium.

This guy is credentialed and dressed as Mozart.

10:28 a.m.: For some reason, they slapped Astroturf down on the floor at the Prudential Center.

10:16 a.m.: These guys were inspired by either Craig Sager, Ron Burgundy or Mike Giardi:

Media day looks especially crowded today, since it’s in a hockey arena, not a domed stadium. There’s probably a lot of pushing and shoving going on inside Peyton Manning’s future scrum.

To keep everyone entertained, there was a high school marching band in the Prudential Center stands.

10:01 a.m.: Media day has just begun. It’s presented by Golden Corral, which is oddly fitting, since it’s like a buffet of interviews.

The Seahawks are letting their fans ask some questions at 12:30 p.m. The team is holding a Reddit AMA.

8 a.m. ET: One of the Seattle Seahawks’ biggest stars might be a no-show for Super Bowl XLVIII Media Day.

Running back Marshawn Lynch, who avoided the media all season in Seattle, is contemplating skipping media day, according to NFL.com. Lynch could face a $100,000 fine if he decides to stay away from the Prudential Center in Newark, N.J., this afternoon.

Lynch’s fullback, Michael Robinson, said Monday that he would stay with Lynch at media day if the reclusive back decides to attend. Lynch told NFL.com that if he decides to show up, he’ll give forced answers.

One player who probably won’t hold anything back is cornerback Richard Sherman. Sherman’s been a star with the media the past two years, though he’s managed to stay out of headlines after talking Sunday when the Seahawks arrived in New Jersey for the Super Bowl.

Stay here at NESN.com for all the biggest stories that come out of media day. 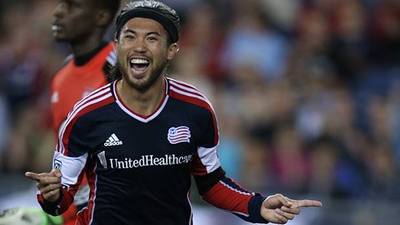